Pollution In India Could Reshape Monsoons

Local emissions over the subcontinent make summer storms more erratic, and may have global consequences 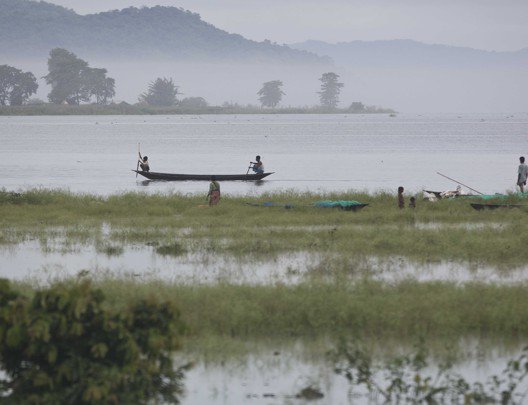 Over the next decade, more than 400 large dams will be built on the Himalayan rivers—by India, China, Nepal, Bhutan, and Pakistan—to feed the region’s hunger for electricity and its need for irrigation. New ports and thermal power plants line the coastal arc that runs from India, through Southeast Asia, to China. India and China have embarked on schemes to divert rivers to bring water to their driest lands: Costing tens or hundreds of billions of dollars, they are the largest and most expensive construction projects the world has ever seen. At stake in how these plans unfold is the welfare of a significant portion of humanity. At stake is the future shape of Asia, the relations among its nations.

The Indian subcontinent is the crucible of the monsoon. In its simplest definition, the monsoon is “a seasonal prevailing wind.” There are other monsoons, in northern Australia and in North America; none is as pronounced, as marked in its reversal between wet and dry seasons, as the South Asian monsoon. More than 70 percent of total rainfall in South Asia occurs during just three months each year, between June and September. Even within that period, rainfall is not consistent: It is compressed into just 100 hours of torrential rain across the summer months.

Despite a vast expansion in irrigation since 1947, 60 percent of Indian agriculture remains rain-fed, and agriculture employs about half of India’s population. Unlike China, unlike most large countries in the world, India’s population will continue to be predominantly rural until the mid-21st century. No comparably large number of human beings anywhere in the world is so dependent on such intensely seasonal rainfall. In the first decade of the 20th century, the finance minister in the imperial government declared that “every budget is a gamble on the rains”; more than a century later, the leading environmental activist Sunita Narain reversed the terms but retained the substance of the observation: “India’s finance minister is the monsoon,” she declared.

Climate is woven into the fabric of Indian social, economic, and political thought in a way that it is not (or is no longer) elsewhere. In the late 20th century, that claim would have raised hackles among scholars of South Asia; it might still do so today. A fundamental assumption of modernity was that we had mastered nature. The notion of India in thrall to the monsoon would seem to perpetuate a colonial idea of India’s irredeemable backwardness. To emphasize the power of the monsoon would be to portray Indian lives as so many marionettes moved by a climatic puppet master. That is how this story would have been understood a generation ago.

The South Asian monsoon has effects far beyond South Asia. We know this, at least in part, because of climate research undertaken in India in the 20th century. Sir Gilbert Walker, a pioneer of global climate science, wrote in 1927 that “the climate of India is of special interest, not merely as that of the greatest tropical region in the British Empire, but also because it seems to have been designed by nature with the object of demonstrating physical processes on a huge scale.” That sense of scientific opportunity, combined with the pressing material need to understand the monsoon, inspired a century of study in India. Charles Normand, Walker’s successor as head of the Indian weather service, insisted that the monsoon is “an active, not a passive, feature in world weather.”

Subsequent research has confirmed his view—the Asian monsoon is entwined with many aspects of the global climate. It has an important influence on global atmospheric circulation. The future behavior of the South Asian monsoon has implications for the whole world. Arguably no other part of the global climate system affects more people, more directly.

The breakthroughs in tropical meteorology of the late 20th century shed new light on the scale and complexity of internal variability in the monsoon on multiple timescales—from the quasiperiodic impact of the El Niño–Southern Oscillation system to the tropical-weather fluctuation pattern known as the Madden-Julian Oscillation. In recent years, the focus of scientific research has been on how the effects of anthropogenic climate change interact with the monsoon’s natural variability in dangerous and unpredictable ways.

The most fundamental forces driving the monsoon are the thermal contrast between the land and the ocean and the availability of moisture. Climate change affects both of these drivers of wind and rain. The warming of the ocean’s surface is likely to augment the amount of moisture the monsoon winds pick up on their journey toward the Indian subcontinent. But if the ocean surface warms more rapidly than the land, which appears to be happening in equatorial waters, this would narrow the temperature gradient that drives the winds, and so weaken circulation. Put simply, many climate models predict that the first of these processes will predominate: “Wet gets wetter” as a result of greenhouse-gas emissions. They predict, that is to say, that the moist monsoon lands will see an increase in rainfall.

But the monsoon is an intricate phenomenon, as meteorologists have long known. It is increasingly clear that monsoon rainfall is affected not only by planetary warming but also by transformations on a regional scale, including the emission of aerosols—from vehicles, crop burning, and domestic fires—and changes in land use. The urgent challenge for climate science is to disentangle and to understand these global and regional influences on the behavior of the monsoon. And so far, the monsoon has proved much harder to capture in models than, say, global temperatures.

The availability of detailed records of climate and rainfall in India—which themselves are a product of the history of Indian meteorology going back to the efforts of Henry Blanford and his colleagues in the late 19th century—have allowed scientists to reconstruct in detail the monsoon’s behavior over the past 60 years. The picture these data present is complex, and in some ways surprising. Average summer rainfall over India has declined by around 7 percent since 1950. The cause of this downward trend in rainfall lies in the pattern of India’s development since independence. Its explanation, that is to say, lies in the province of economic history.

In the late 1990s, research vessels observed exceptionally high concentrations of aerosols in the northern Indian Ocean. Satellite images showed a stain that spread across the Indo-Gangetic Plain and over the Indian Ocean—researchers called it the “brown cloud,” an accurate, if not a poetic, description of the haze. Between January and March 1999, a large team of investigators set out to understand this brown cloud, taking readings from their base at the Kaashidhoo Observatory on one of the most remote islands of the Maldives. The project was led by Veerabhadran Ramanathan, an Indian oceanographer based at the Scripps Institute in La Jolla, California. One of the scientists involved was the Dutch atmospheric chemist Paul Crutzen, who around the same time also coined the term Anthropocene, referring to a new geological epoch in which human activity is the most important influence on Earth’s physical processes.

The project found that the haze was a noxious composite of sulfate, nitrate, black carbon, dust, and fly ash, as well as naturally occurring aerosols including sea salt and mineral dust. Three-quarters of the composition of the brown cloud could be attributed directly to human activity, especially concentrated along the densely populated Indo-Gangetic Plain and northwestern India. In this region, where up to 80 percent of the population remains rural, and where many rural families continue to be deprived of electricity, much of the black carbon is produced by domestic burning of biomass—wood, crop residue, dung, and coal— used primarily for cooking. Open crop burning accounts for the rest. The stoves used in households are inefficient and combustion is incomplete, producing large amounts of soot.

Apart from their likely effects on regional climate, these emissions also poison human bodies. By one estimate, more than 400,000 premature deaths each year in India can be attributed to indoor pollution. Black carbon combines, in the brown cloud, with sulfates and other aerosols—and the Indo-Gangetic Plain bears an additional burden in this respect, as a result of pockets of intensive industrial and extractive activity. Since the late 19th century, the Indo-Gangetic Plain has been the core region of India’s extractive industries, built around the rich coal and mineral deposits in the Chota Nagpur region. Further along the Yamuna River, the Delhi region is one of India’s fastest-growing metropolitan areas, and its largest in absolute terms. Emissions have increased exponentially since the 1970s as India’s population has grown, as its economy has expanded, as inequalities within and among regions have widened. The Indo-Gangetic Plain suffers from a double pathology: The sulfur, carbon, and nitrogen-dioxide emissions that accompany energy-intensive growth are combined with the black carbon that comes from the use of cheaper, dirtier fuels by millions without access to electricity.

All this is shifting the monsoon’s patterns. Aerosols absorb solar radiation, allowing less of it to reach Earth’s surface. This cools the land, diminishes the temperature contrast between the land and sea, and weakens the atmospheric circulation that sustains the summer monsoon. Changes in circulation over the Indian subcontinent in turn affect the tightly integrated air-sea interaction that binds the Asian continent with the Indian Ocean, a system that already contains plenty of internal variability. Because of the way the Asian monsoon is linked to other parts of the planet’s climate, it is possible that aerosols over South Asia have global consequences. When all these effects are coupled with the impact of global warming on the ocean and the atmosphere, the instabilities multiply. Far from counteracting the effect of greenhouse gases in any simple sense, the impact of aerosols complicates them.

A further driver of regional climate change is rapid changes in land use. Over the past 150 years, forest cover over most parts of Asia has declined dramatically. The intensification of agricultural production in India, and the use of more water for irrigation, has affected the moisture of the soil, its capacity to absorb or reflect heat. Crops reflect more solar radiation than forests, which tend to absorb it; the greater reflexivity of land planted with crops makes it cooler, once again weakening the temperature differentials that drive circulation and rainfall. The tropical meteorologist Deepti Singh points out that climate models have often failed to predict the monsoon’s behavior in part because they are too abstract to take into account the “complex topography, temperature, and moisture gradients in the region that can influence the monsoon circulation.” The models omit, that is, precisely the details of landscape and microclimate that the meteorologists of a century earlier were so deeply interested in, which they depicted in their detailed local and regional maps of India’s climate.

We are left with the most bitter of ironies. Many of the measures taken to secure India against the vagaries of the monsoon in the second half of the 20th century—intensive irrigation, the planting of new crops—have, through a cascade of unintended consequences, destabilized the monsoon itself. When the geographers of the early 20th century wrote of “monsoon Asia,” they saw the monsoon as sovereign—it shaped the lives of hundreds of millions of people, who waited on its every move. Monsoon Asia means something quite different now, when the monsoon’s behavior, increasingly erratic, responds to human intervention.

This post is adapted from Amrith’s new book, Unruly Waters: How Rains, Rivers, Coasts, and Seas Have Shaped Asia’s History.

is the Mehra Family Professor of South Asian Studies and Professor of History at Harvard University and a 2017 MacArthur Fellow. He is the author of multiple books, including Crossing the Bay of Bengal and Unruly Waters.

World Environment Day 2020 Nepal: Bio-diversity Of Nijgadh Forest Is Under A Threat By NEW SPOTLIGHT ONLINE 2 months, 1 week ago

Locust Are Coming Closer , Nepal Is Yet To Announce Measures By NEW SPOTLIGHT ONLINE 2 months, 1 week ago