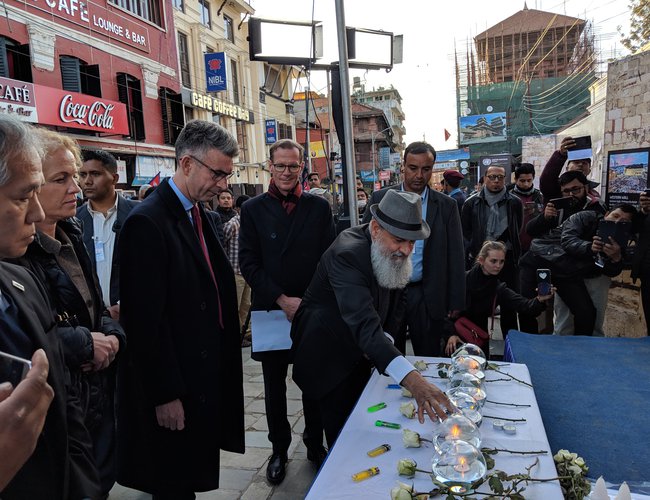 The United Nations and three embassies working in Nepal expressed their commitments to stand up for human rights and to never again allow anyone to become the victim of genocide anywhere in the world.

According to a press release issued by UN, the commitments were made by the Resident Coordinator a.i. of the United Nations Nepal Wenny Kusuma, Ambassador of Federal Republic of Germany Roland Schäfer, Zane Petre, Deputy Head of the EU Delegation to Nepal and Ambassador of Israel Benny Omer at the UN International Day of Commemoration in memory of the Victims of the Holocaust. 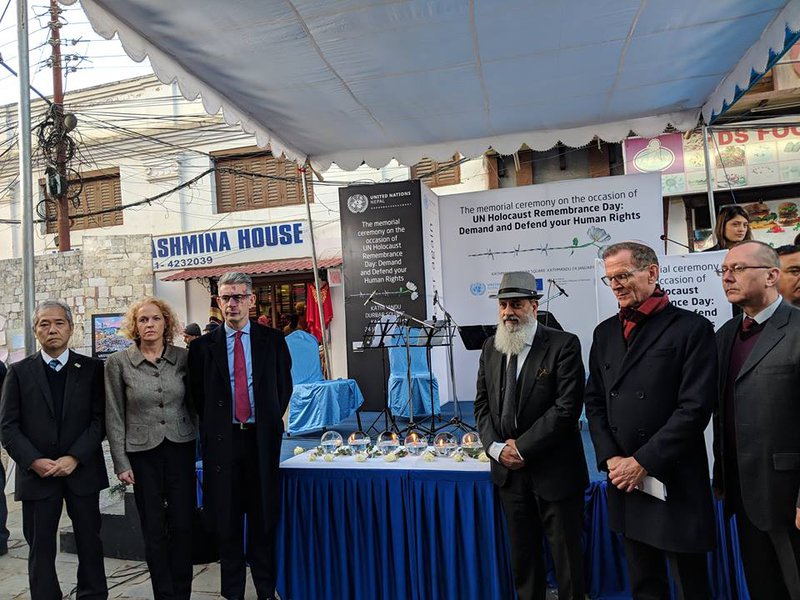 The event was held to pay tribute to the liberators of concentration camps and to honor the memory of the eleven million victims of the Holocaust.

The theme for 2019’s observance is “Holocaust Remembrance: Demand and Defend your Human Rights”. The theme emphasizes the universal dimension of the Holocaust and the significance of human rights in current times where rising fear and hatred, xenophobic trends translating into anti-Semitism, homophobia, transphobia, Islamophobia and other discriminatory behaviors are jeopardizing global peace. 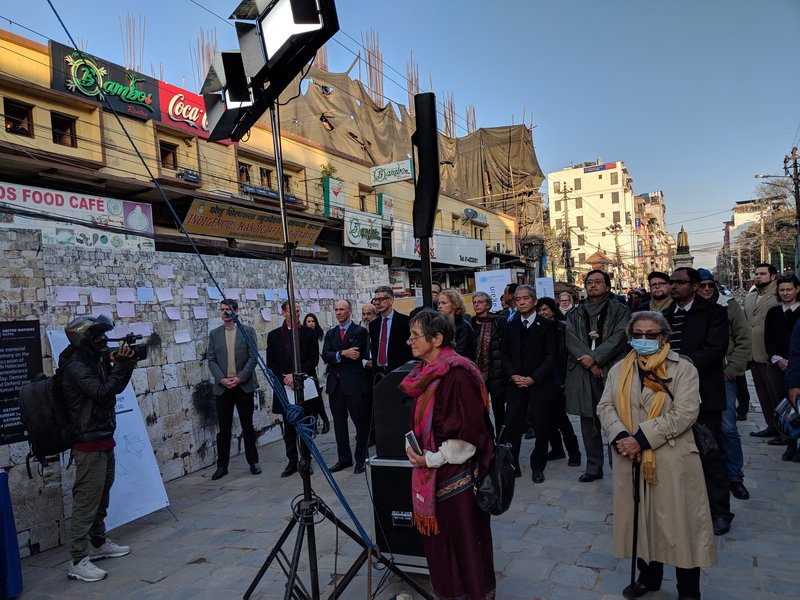 Speaking at the ceremony, Wenny Kusuma, Resident Coordinator a.i. of the United Nations Nepal, said, “we cannot forget the past. Our commemoration of this day is a reminder of the horrors that can emerge from discrimination and intolerance. Remembering the atrocities of the Holocaust, the UN would like to take a stand to protect the rights of all citizens, regardless of their race, ethnicity, religion, disability, sexual orientation, gender expression and/or gender identity to continue to lead hand in hand.” 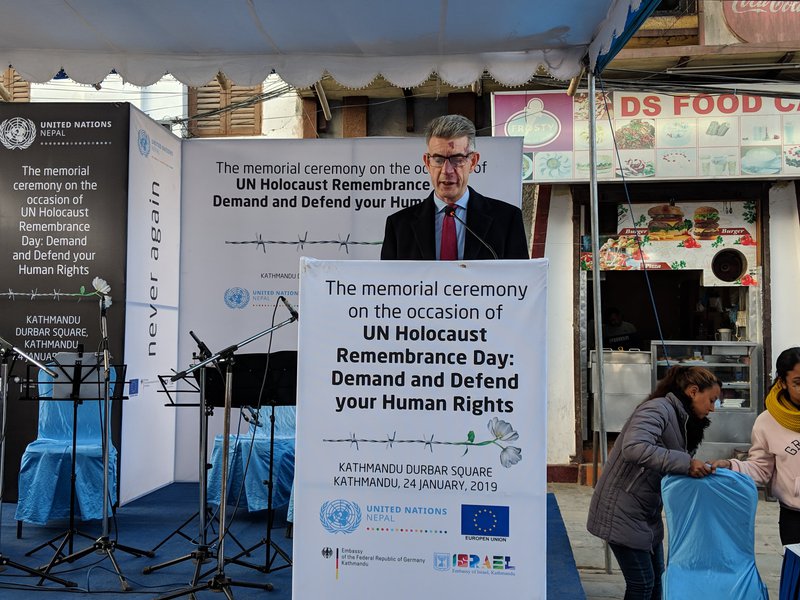 Benny Omer, Ambassador of Israel to Nepal, recited the special Jewish prayer Yizkor and highly praised the extraordinary courage of the diplomats who risked their own lives to save thousands of Jewish people during World War II. He further wished that such heinous crime would never repeat in the history of mankind and for that educating the future generation about the Holocaust is a must. 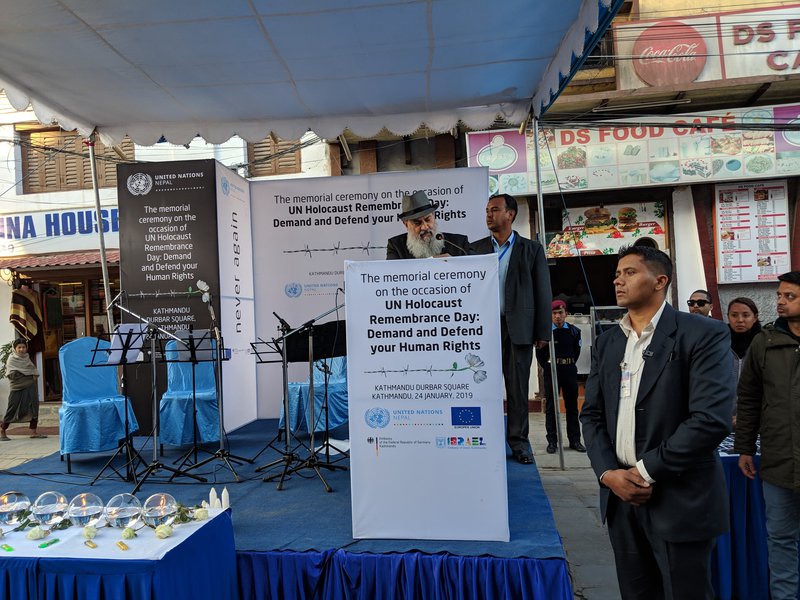 Also honored at the ceremony were Chiune Sugihara, Japanese Consul in Lithuania, Captain Francis Foley, UK Consul in Germany and George Ferdinand Duckwitz, German Maritime Attache in Denmark, awarded with the Righteous Among the Nations award for risking their lives during the Holocaust to save Jewish people from extermination by the Nazis. 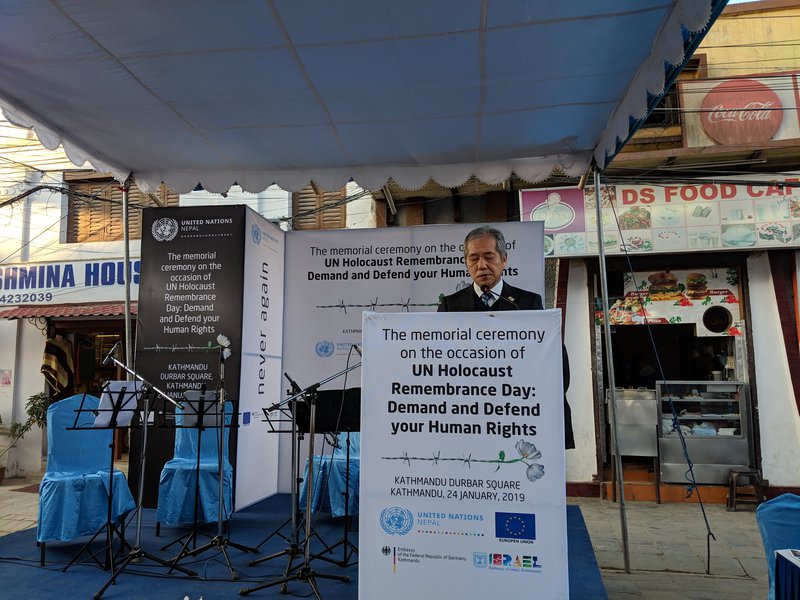 Roland Schäfer, reading out the life story of George Ferdinand Duckwitz, shared these thoughts: Our past defines our present life and our future. Whether the past imprisons incoming generation or liberates them, that depends on how we deal with it. Telling the truth, prosecuting crimes, compensating victims and preventing that those crimes ever happens again, that is the path towards freedom. 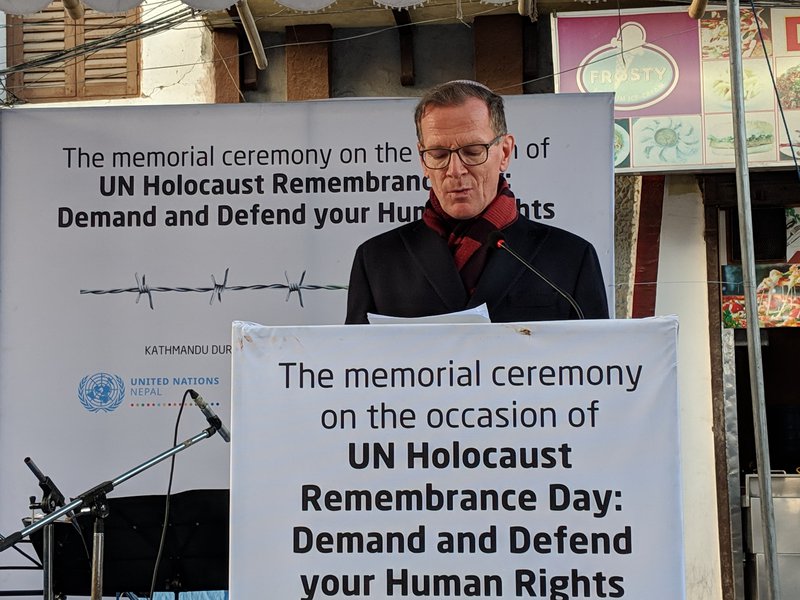 The memorial ceremony activities included a musical performance by Audeamus Music Foundation who played excerpts from “Schindler's List”, a movie depicting an Austrian businessman who saved many Jewish people from being killed by the Nazis during World War II. Likewise, a replica of Jerusalem’s Western Wall of Peace was set up at the venue for participants to post their prayers and messages. The ceremony also hosted a photo exhibition titled “Beyond the Duty” dedicated to the diplomats recognized as Righteous Among the Nations for their unwavering deeds to save lives of the Jewish people.

"Preserving and transmitting the memory is a duty towards those who lost their lives, and towards our children. Memories have to shape our present and our future. The European Union continues to stand against hate speeches and anti-Semitic activities thereby advocating for peace, mutual co-existence and progress all over the world," said AZane Petre, Deputy Head of the EU Delegation to Nepal. 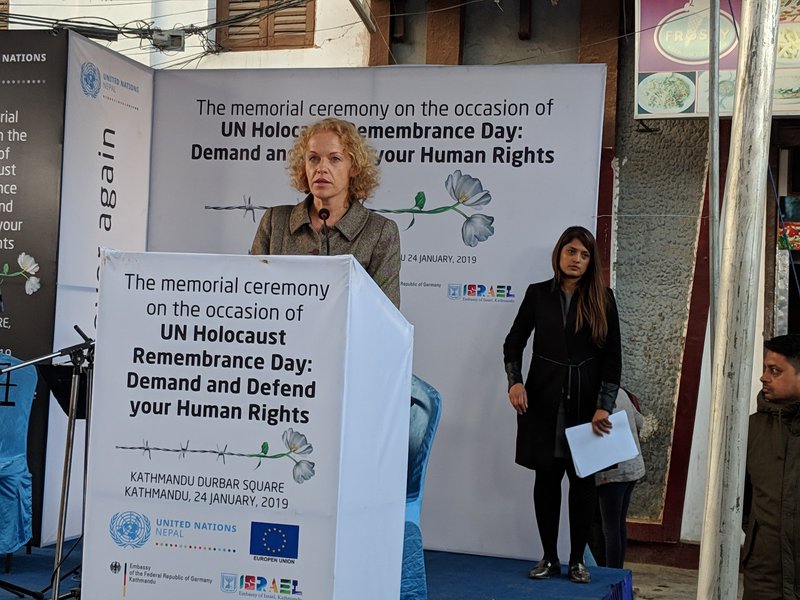 Holocaust Remembrance Day was established by the General Assembly of the United Nations with resolution 60/7 in 2005. It is a multifaceted annual program observed globally on 27 January in memory of the victims of the Holocaust. In Nepal, the day was observed jointly by the United Nations Nepal, the Embassy of Federal Republic of Germany, the Delegation of the European Union to Nepal and the Embassy of Israel on 24 January 2019.

This international Day is– observed with ceremonies and activities at United Nations Headquarters in New York and at UN offices around the world. In Nepal, a, it is being organized by United Nations along with the delegation of the European Union, the Embassy of the Federal Republic of Germany and the Embassy of Israel.

The theme of the Holocaust remembrance and education activities this year is “Holocaust Remembrance: Demand and Defend Your Human Rights”. This theme encourages youth to learn from the lessons of the Holocaust, act against discrimination and defend democratic values in their communities, at a time when the spread of Neo-Nazism and hate groups fuels the rising antisemitism and other forms of hatred around the world. The theme highlights the 70th anniversary of the Universal Declaration of Human Rights and the Convention on the Prevention and Punishment of the Crime of Genocide.

The Holocaust was a genocide during World War II in which Nazi Germany aided by its collaborators, systematically murdered some six million European Jews, around two-thirds of the Jewish population of Europe, between 1941 and 1945. Jews were targeted for extermination as part of a larger event involving the persecution and murder of groups considered as alien or dangerous by the Nazi ideology. Political opponents, gay men, Jehovah's Witnesses and, "incurably sick", Roma and citizens of Poland, Central European countries and of the then Soviet Union were encarcerated or killed.

Germany implemented the persecution in stages. Following Adolf Hitler's rise to power in 1933, the government passed laws to exclude Jews from civil society, most prominently the Nürnberg Laws in 1935. Starting in 1933, the Nazis built a network of concentration camps in Germany for political opponents and people deemed "undesirable". After the invasion of Poland in 1939, the regime set up ghettos to segregate Jews. Over 42,000 camps, ghettos, and other detention sites were established.

The deportation of Jews to the ghettos culminated in the policy of extermination the Nazis called the "Final Solution to the Jewish Question", discussed by senior Nazi officials at the Wannsee Conference in Berlin in January 1942. As German forces captured territories in the East, all anti-Jewish measures were radicalized. Under the coordination of the SS, with directions from the highest leadership of the Nazi Party, killings were committed within Germany itself, throughout German-occupied Europe, and across all territories controlled by the Axis powers . Paramilitary death squads called “Einsatzgruppen” in cooperation with Wehrmacht police battalions and local collaborators murdered around 1.3 million Jews in mass shootings between 1941 and 1945. By mid-1942, victims were being deported from the ghettos in sealed freight trains to extermination camps where, if they survived the journey, they were killed in gas chambers. The killing continued until the end of World War II in Europe in May 1945. 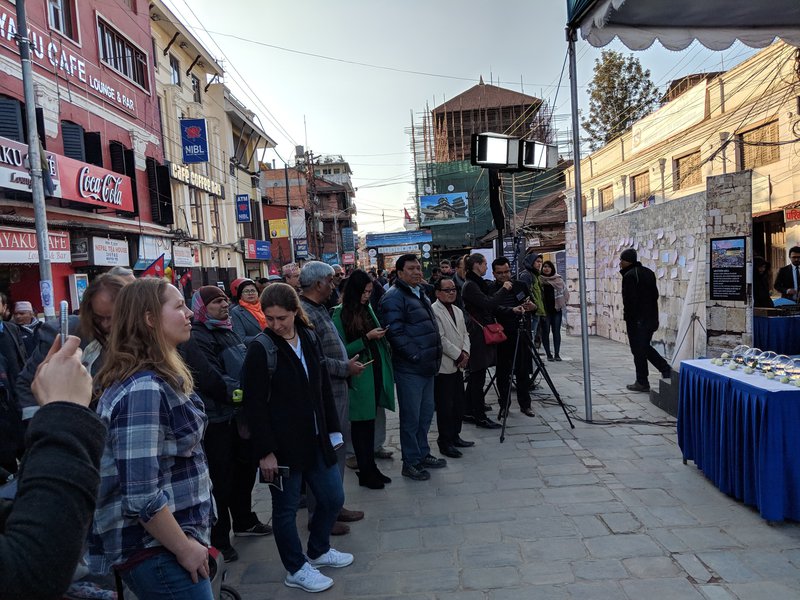 On 27th January 1945, the Nazi Concentration and Extermination Camp of Auschwitz-Birkenau was liberated by the Allied troops. Auschwitz has become emblematic for the murder of 6 Million Jews by German Nazi Regime from 1933-1945. That is why January 27th was officially proclaimed International Day of Commemoration in memory of the Victims of the Holocaust by the United Nations General Assembly on 1st November 2009. Please note that the commemoration in Kathmandu will take place three day earlier.

XcelTrip Reaches Out To Hotel Industry In The Hour Crisis By NEW SPOTLIGHT ONLINE 14 hours, 32 minutes ago