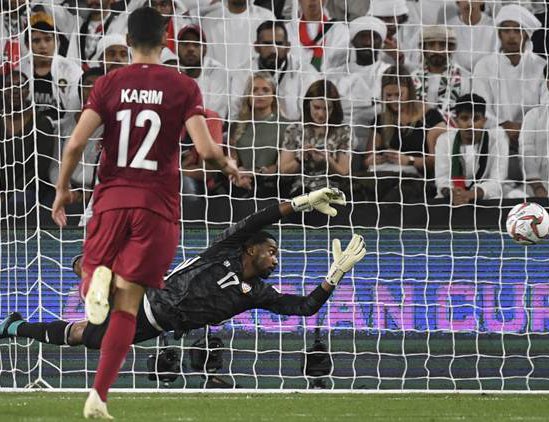 Amid shoes being thrown in insult, Qatar won its politically charged match against host United Arab Emirates 4-0 Tuesday and advanced to the Asian Cup final. The Qataris, who will host the World Cup in 2022, have won all six of their matches and have yet to concede a goal _ the first country to do that at the continental soccer championship.

Qatar will face four-time champion Japan on Friday in the final. Both teams were invited last year to play at the Copa America in 2019, giving the winner of this week’s match a chance to win a second continental title in July.

A regional boycott of Qatar, led by Saudi Arabia, has impacted the team’s logistics at the Asian Cup and made it difficult for the country’s fans to attend games. The United Arab Emirates, Bahrain and Egypt are also part of the boycott.

The Qataris, however, have denied accusations that they support extremists. On the soccer field, Qatar beat Saudi Arabia 2-0 in the group stage before the 4-0 rout of UAE on Tuesday at the Mohammed Bin Zayed Stadium.

Boualem Khoukhi gave Qatar the lead in the 22nd minute, and Almoez Ali doubled the advantage 15 minutes later. The second goal prompted the UAE fans to start throwing their shoes at the Qatari players, an act which is considered to be an insult.

The Asian Football Confederation said it could launch an investigation. “Any incident of this nature will be contained in the official match report which will then be investigated by the AFC,” the soccer body said.

Ali’s goal was his eighth of the tournament, equaling the record set by Iran forward Ali Daei in 1996 when the Asian Cup was also hosted by the UAE. The 22-year-old Ali will have a chance to break the record against Japan on Friday.

Qatar added two more goals late in the match, the first from Hasan Al Haydos in the 80th minute and the last from Hamid Ismaeil seconds after coming off the bench with time winding down.

The UAE played the final seconds with 10 men after Ismail Ahmed was sent off for a rough tackle.