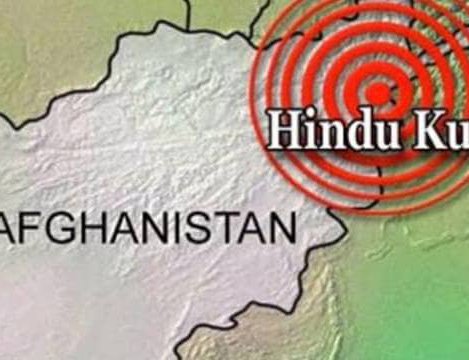 An earthquake of 5.6 magnitude rocked Afghanistan-Pakistan border on Saturday evening sending tremors as far New Delhi and its adjoining areas. No report of any damage to life and property has been received so far.

According to USGS, the earthquake was epicenters in Jarm, Afghanistan about 211 km below the earth surface.

According to Indian Express, In the Indian capital region the quake was big enough for Metro services to be suspended and alarm bells to go off at housing societies.

The quake was also felt in Srinagar and elsewhere in Jammu and Kashmir besides Punjab, Haryana, Chandigarh, Rajasthan and Uttar Pradesh.

An earthquake of magnitude 6.8 struck the Hindukush region in northern Afghanistan in the afternoon on Sunday, with strong tremors being felt through most of north India.

The epicentre of the earthquake was located 39 km west-southwest of Eshkasham town in Afghanistan, almost on the border with Tajikistan. The place is about 282 km north east of Kabul, according to the US Geological Survey.

This is very near to the location of the 7.5 magnitude earthquake that had struck the region on October 26 last year. That earthquake was also felt very strongly throughout north and northwest India.

Today’s earthquake originated 210 km below the earth’s surface, a deep earthquake that is common in this area. Deep earthquakes travel very far, a reason why they are felt so strongly as far ahead as Delhi, about 1200 km away.

The quake was also felt in Srinagar and elsewhere in Jammu and Kashmir besides Punjab, Haryana, Chandigarh, Rajasthan and Uttar Pradesh.

Pakistani media said the tremors were strongly felt in Lahore and other parts of Punjab province.

Nepal,Israel Exchange Greetings On 60th Anniversary Of Establishment Of Relations By NEW SPOTLIGHT ONLINE 21 hours ago

COVID-19: Number Of Children Living In Household Poverty To Soar By Up To 86 Million By End Of Year By NEW SPOTLIGHT ONLINE 23 hours, 23 minutes ago

Twelve Nepali Migrant Returnees Killed and 20 Injured In a Bus Accident In Banke By NEW SPOTLIGHT ONLINE 1 day, 9 hours ago