Although the government has handled all internal crises successfully in the last one year, the government is still vulnerable, given its contradictions stand 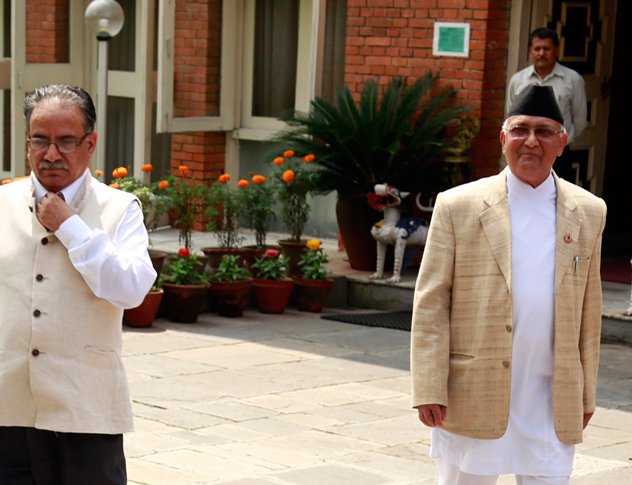 Although the breaking of the fasting by Dr. Govinda K.C gives some respite for the government, there are several political complications hunting the government led by KP Sharma Oli, making his government unstable.

Just after a successful diplomacy of the government to establish warm relations with United States and western powers, NCP co-chair Prachanda’s statement pushed it to the Russian and Chinese side.

Having been the first Nepali leader, and South Asian after Indian Prime Ministers, to address Davos, an international forum of high level scholars, Prime Minister Oli’s status had gone up so high. Although his statements on liberal democracy and free media did not match, PM Oli handled all the questions in a candid manner.

Growing up in a middle class family in eastern Nepal and joining violent Maoist movement in his early age, Prime Minister Oli’s address and his interactions in Davos were astonishing.

In his last one year tenure, he has established a personal rapport with leaders in India and China and worked to restore Nepal’s relations with western countries including United States of America.

His personal relations with Indian prime minister Narendra Modi broke following a last minute decision to withdraw Nepal’s participation in BIMSTEC Military exercise and the recent statement issued by his co-chair Prachanda badly damaged his efforts to warm up relations with United States and West.

Relying so much on the support of Prachanda, who is waiting for a proper time to dislodge the government, Prime Minister KP Sharma Oli is in no position now to confront with Prachanda. Knowing the political weakness of Prime minister Oli, Prachanda even defied the request of foreign minister to correct the statement on Venezuela.

After the return of prime minister Oli, co-chair Prachanda remained virtually silent spending his time taking part in the development projects in his home constituency in Chitwan.

As main opposition party Nepali Congress, which criticized the government’sfailure to handle response to Venezuela crisis terming the move immature, has already announced a protest program in the street and parliament, Prime Minister Oli has a tough time.

Within his party, the situation is not conducive to him. Most of top leaders including former prime minister Prachanda, Madhav Kumar Nepal, Jhalnath Khanal and deputy prime minister Bam Dev Gautam are jointly hatching a conspiracy.

Even Prachanda’s initial draft statement was reportedly drafted by a joint meeting of Prachanda, Nepal and General Secretary Bishnu Poudel. Given the internal and external situation, the road ahead for Prime Minister Oli is bumpy and full of turmoil.

Nepal Has Made A Steady Economic Progress In The Last Three Years: Prime Minister Oli By NEW SPOTLIGHT ONLINE 4 days, 8 hours ago

Youth, Politics And The Future of The Nation By Deepak Raj Joshi 2 weeks ago

Cabinet Reshuffle Is Not An Agenda Now: PM Oli By NEW SPOTLIGHT ONLINE 2 weeks, 4 days ago