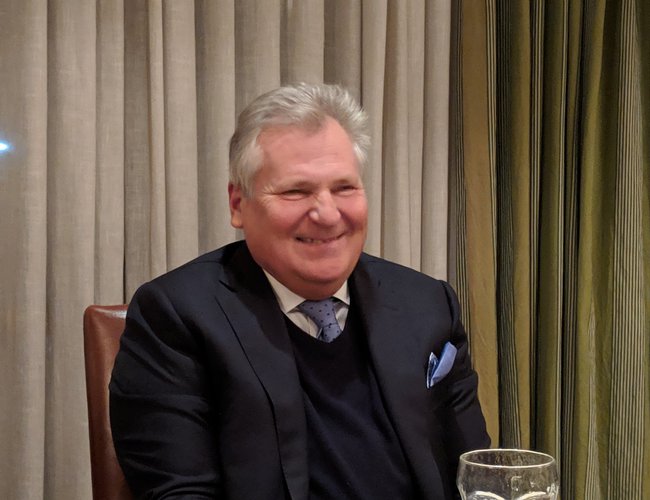 At a time when a group of political class under Maoist rebel is controlling political power denying to recognize the Monarchy, which ruled the country for two centuries, Poland's former president who led the reconciliation in Poland said that this situation will be likely to create chaos in the future.

Former president of Poland Alexksander Kwasnieski said that reconciliation among all the political forces is a key to make political transformation a success and peaceful.

Taking to media persons in Kathmandu, former president of Poland, who is currently in Nepal, said that South African leader Nelson Mandela and Desmond Tutu have shown how the reconciliation between apartheid ruler and black brought prosperity and economic stability.

“In Poland also, we have brought the former leaders of communist party and the new forces together for peace, prosperity and democracy,” said president Kwasnieski, who ruled Poland for ten years as a president. “No one is left behind and everybody needs to be put in the same board,” said Kwasnieski.

Equally important is justice to the victims of violence with the reconciliation of all the forces. “I have seen positive development in Nepal. Your Prime Minister has expressed his commitment to conclude the peace process providing justice to all,” said Kwasnieski.

He also appreciated Nepal’s commitment towards Sustainable Development Goals (SDGs). “After meeting with Prime Minister KP Sharma Oli and National Planning Commission members, I am very much impressed with the SDGs implementation in Nepal.”

President of the Poland (1995-2005) Date, Aleksander Kwasniewski studied Transport Economics and Foreign Trade at the University of Gdańsk.

Aleksander Kwasniewski joined the ruling communist Polish United Workers' Party (PZPR) in 1977, and remained a member until it was dissolved in 1990. He was particularly active in the communist students movement, and worked as the editor-in-chief of the student weekly ITD magazine from 1981 until 1984, and of Sztandar Młodych from 1984 to 1985. 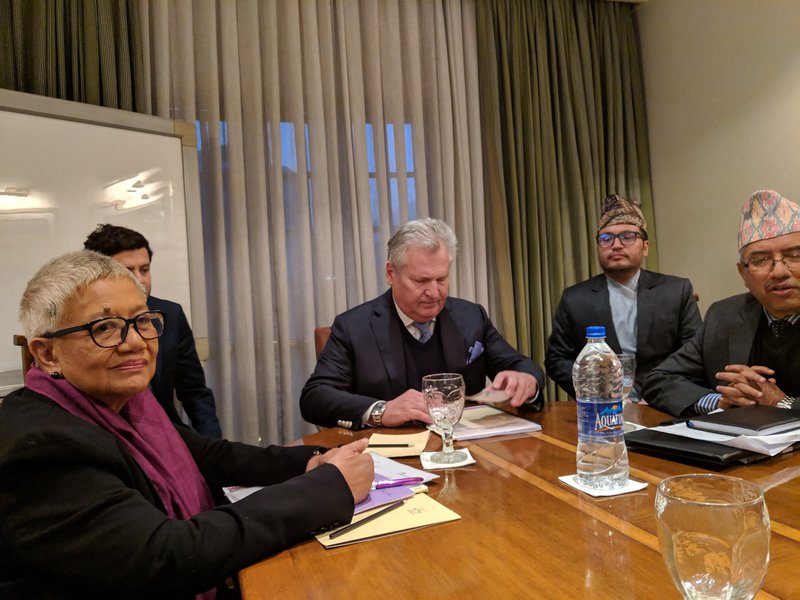 Kwasniewski participated in the famous “Round-Table” negotiations in Poland that finally brought the peaceful transformation of Poland and the whole Central and Eastern Europe from communism to democracy. Once the Iron Curtain had fallen, he co-founded the Social Democratic Party of the Republic of Poland (SdRP) and became its first chairman.

Aleksander Kwaśniewski won the Polish presidential elections in December 1995, defeating incumbent Lech Walesa. One of Kwasniewski’s first great achievements was to bring about a new democratic Constitution in Poland, which became effective in July 1997. Highly popular in his country, he was re-elected in 2000 for a second and final five-year term. During his Presidency, he played a key role in the reconciliation between the Poles and the German, the Jewish and the Ukrainian people.

He further inspired the international mediation efforts during the 2004 Orange Revolution in Ukraine, helping the young democracy to prevail. Finally, he also was a strong advocate of EU and NATO integration, and made Poland join both institutions during his tenure.

Kwasniewski was appointed Distinguished Scholar in the Practice of Global Leadership at Georgetown University, where, as a visiting faculty member, he teaches students in the Edmund A. Walsh School of Foreign Service. He is a member of the Board of Trustees of the International Crisis Group, member of the Atlantic Council of the United States, member of the Bilderberg Group, Head of the Supervisory Board of the Amicus Europae Foundation in Warsaw, International Center for Political Studies in Kiev, Head of the European Council on Tolerance and Reconciliation and Head of the Board of Yalta European Strategy.

Cassam Uteem was born in Port Louis (Mauritius) on March 22, 1941. He studied at Paris VII University where he received a Bachelor’s degree in Art and a Master’s degree in Psychology.

Dr. Clem McCartney is an independent research consultant on conflict and community issues. He is an associate of the Berghof Foundation for Peace Support and has contributed to a number of Berghof publications including the "Bergh of Handbook for Conflict Transformation", and one of its Dialogue Series on Security Sector Reform. He is also an associate of Conciliation Resources in London and has been consultant to their Comparative Learning Project, working in Colombia and the Philippines, and their Caucasus Program.

In 2013, Rafael served as Project Coordinator for the United Nations Development Program (UNDP) in Mexico within the Project “Supporting the Strengthening of government institutions and civil society capacities to improve protection of vulnerable migrants in transit” funded by the Human Security Fund of the United Nations.

Nepal Has Made A Steady Economic Progress In The Last Three Years: Prime Minister Oli By NEW SPOTLIGHT ONLINE 4 days, 10 hours ago

Youth, Politics And The Future of The Nation By Deepak Raj Joshi 2 weeks ago

Cabinet Reshuffle Is Not An Agenda Now: PM Oli By NEW SPOTLIGHT ONLINE 2 weeks, 4 days ago