The victims of conflict demand justice for their losses 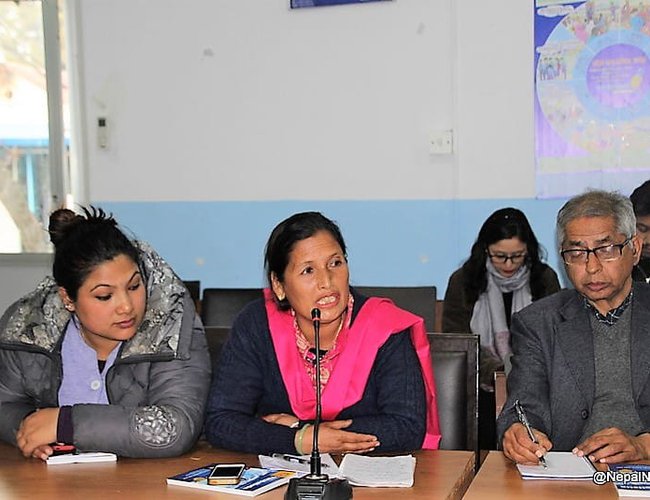 “A police officer who was involved in the disappearance if my father is now promoted to Deputy Inspector General of police. However, I don’t know the whereabouts of my father. “

A Maoist combatant, who killed my father became, a member of parliament and he is enjoying all the state privileges. How long do we have to wait to see to get justice on the crime? How long does the state continue to take the sides of perpetuators?

These were two painful statements delivered by the victims of the conflict. Although 12 years have already passed since Nepal entered the peace process, the wounds of the conflict are yet to be healed.

At a time when the tenure of the commission is going to expire, National Human Rights Commission organized an interaction with the victims of the conflict. Conflict victims demanded whether they will be allowed to identify culprits? “Even the Martyrs are classified, is there any country of the world where martyrs are classified? You people get benefits of our price and you became ministers.”

Some asked: Kindly tell us what is the realty? If necessary we will rebel again. Present there were Law Minister Bhanubhakta Dhakal, Attorney General Agni Kharel, members of human rights commission and victims. The two-way discussions lasted almost two hours.

Tulsi, a resident of Dang and widow of police, demanded compensation and punishment for the Maoist involved in brutal killing of her husband. “Had not my husband not stood in the frontline, you would not have been in the present positions. At the cost of life of my husband, you secured minister but we have not even got the compensation.”

She asked your government ordered him to fight with Maoist to protect people but nobody is listening to us even in street protests. “Where do we have to go for justice?” demanded Tulsa.

Maoist killed the husband of Naina Karki, a resident of Jajarkot, in 2005. “Why was my husband killed,” asked Karki. “Don’ t think that we will forget the death by receiving one million compensation.”

As the government is reportedly preparing to table a bill on transitional justice with a provision to give blanket justice to those involved in heinous crime during the conflict, the victims of conflict have started to show their concern.

“My brother was killed and sister disappeared. We have filed complaints against suspects involved in the crime. Nothing has happened even in almost a decade. Old mother and father have been waiting to see their daughter to come back. Kindly reveal to us, whether she is still alive?” asked Sushila Chaudhary from Dang.

Geeta Rasaili, whose husband disappeared in 2004, has been knocking the doors about him but she is yet to get any information. “I need justice and need to know who made my husband disappear?” said Gita Rasili.

However, Minister of Law and Justice Bhanu Bhakta Dhakal said that the government will not give blanket justice. “I understand the anger of victims. This is natural for them to cry till they get the results.”

According to Truth and Reconciliation Commission, during 12 years long conflict, 17,886 people were killed, 9000 injured, 80,000 displaced and 1500 disappeared.

As the victims and international community have expressed their concerns regarding the transitional justice, foreign minister Pradeep Kumar Gyawali recently presented the government’s stand before ambassadors based in Kathmandu saying that the government is committed to give justice to the victims.