Walking around Kathmandu is becoming increasingly hazardous due to the simplest task of breathing being made difficult by the appalling air pollution. Nepal’s air quality is ranked as the worst out of 180 countries, according to the 2018 Environmental Performance Index, with a score of 3.94 where 0=worst and 100=best. For the residents of Kathmandu, this may not come as a surprise and as more people gain awareness and realise the harmful effects of air pollution, Nepal’s government must do all to tackle this issue immediately. 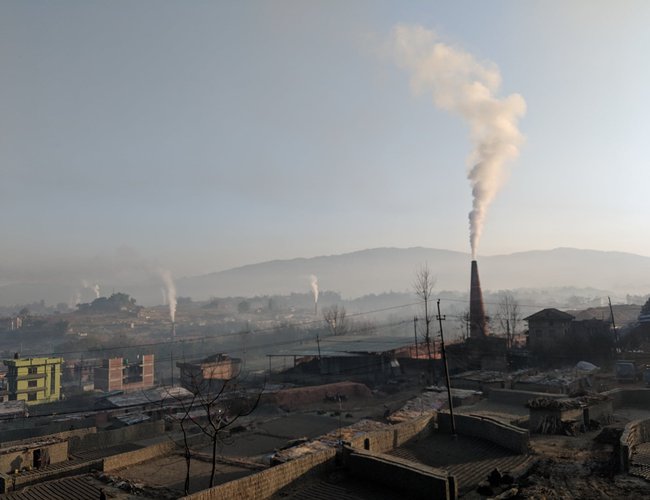 The roads of Kathmandu, particularly in this dry winter season, can get so smoggy you can barely see a few metres ahead of you even in the daytime. It is, quite literally, a fog of deadly air pollution: toxic vehicle emissions, heavy use of fossil fuels, smoke from burning waste and dust make up the deadly concoction that has disastrous consequences, not only to the environment, but to people’s health as well. In Nepal overall, the main contributors of air pollution range from vehicles to brick kilns to burning of biomass as fuel or burning of waste among many others.

Since Kathmandu is one of the fastest urbanising cities in South Asia, growing at 4% per year, it is no wonder that the capital is also facing increasing pollution problems. Such is the extent of the issue, that over the past recent years till date, Kathmandu’s ambient (outdoor) air quality is, on a daily basis, reaching levels of “unhealthy” and even “hazardous”. To fully apprehend the consequence of such levels of air quality, an understanding of how and what sets these ratings is needed.

There are various types of air pollution which is made up of a complex mixture of components that can negatively affect human health. These outdoor pollutants include particulate matter (PM), ozone (O3), nitrogen oxides (NOx), sulphur dioxide (SO2), carbon monoxide (CO) and other chemicals. However, it is particulate matter that affects more people than any other pollutant. Made up of sulphate, nitrates, ammonia, sodium chloride, black carbon, mineral dust and water, all of which is composited into solid and liquid particles suspended in the air. Coarse particulate matter has a diameter of 10 microns or less (≤ PM10) which is roughly one-seventh the diameter of a normal human hair and can block passages deep inside the lungs. Whilst fine particulate matter, with a diameter of 2.5 microns or less (≤ PM2.5), is even more dangerous because of its ultrafine size that can penetrate not only the lung barrier but also enter the blood system.

There is an overwhelming number of research that points to serious health risks and even death from long term exposure to air pollution. The WHO estimate that ambient air pollution, in both cities and rural areas, caused 4.2 million premature deaths worldwide in 2016. Of these premature deaths, some 58% were due to ischaemic heart disease and strokes, whilst 18% of deaths were caused by chronic obstructive pulmonary disease and acute lower respiratory infections respectively, and 6% of deaths as a result of lung cancer. 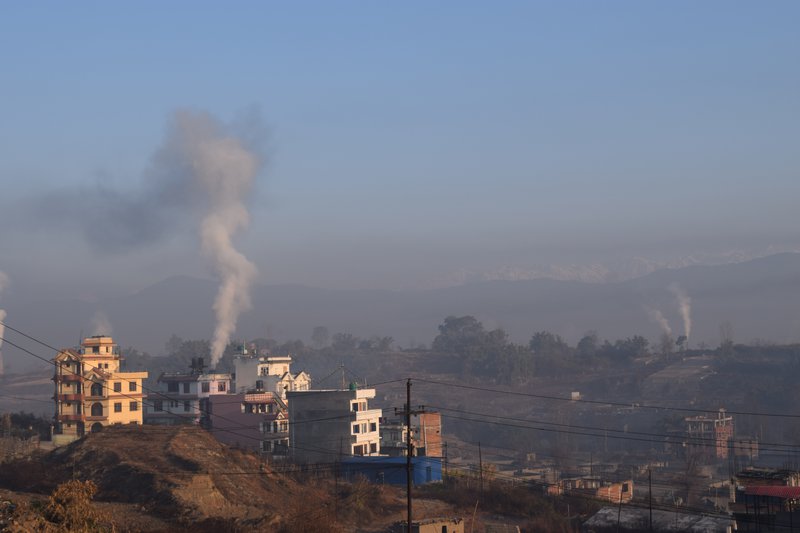 It is children and the elderly who are the most vulnerable to problems associated with air pollution. In fact, in the United Nations International Children's Emergency Fund’s (UNICEF) 2016 study about the impact of air pollution on children, it states that approximately 600,000 children under the age of five die every year from diseases caused or worsened by the effects of indoor and outdoor air pollution. What’s more, the study found that air pollution can even have an impact on unborn children; pregnant women who had chronic exposure to high levels of fine particulate matter, PM2.5 , had higher rates of early foetal loss, preterm delivery and lower birthweight.

After death, the next worse consequence of air pollution is that it can disrupt the physical and cognitive development of children. UNICEF points that air pollution is strongly associated with respiratory conditions such as asthma, pneumonia, bronchitis and others, as well as exacerbating underlying health issues which in turn may prevent children from going to school. Worryingly, if left untreated, children who develop some health complications linked to air pollution could remain dealing with its affects for a lifetime.

With air pollution causing such devastating impacts on human health, its ripples spread to the whole development of the country. For instance, with children becoming ill due to the underlying effects of air pollution, they are unable to reap the full benefits of education which may cause the overall quality and skills of the future workforce to go down. Along with this, having a majority of the population that suffers from lifelong health-debilitating conditions will have crippling impacts on Nepal’s health sector. All this ultimately has long-term negative repercussions for the progression of Nepal because without a well-educated and healthy workforce, a country’s economic growth will struggle and therefore the country’s overall development will weaken.

That is only the consequences on human health, indeed the consequences of air pollution cannot be mentioned without its dire effects on Nepal’s most famous and treasured resource: the Himalayas. The International Centre for Integrated Mountain Development (ICIMOD) warns that air pollution containing black carbon from smoke and vehicle emissions is settling on glaciers and snow, darkening the once pristine landscape of the mountain range that’s home to the tallest mountain in the world, Sagarmatha, more commonly known as Mt. Everest. With the Himalayas losing its beauty because of the black tainting from soot, it could have adverse ramifications for Nepal’s tourism. Since the country relies so heavily on tourism, any reduction in that sector would spell a huge loss for Nepal’s GDP.

Although it is not the ugly discolouration that is the main problem, it is the fact that black carbon absorbs a lot of solar energy which is causing the snow and ice to absorb more of the sun’s radiation. This creates a heating effect which melts the snow and ice, shrinking the glaciers as well as warming up the air inducing a change in rainfall patterns. Such an alteration in the weather in regards to rainfall patterns means that the monsoon season would be affected and that could have serious impacts on the one billion people who depend on the Himalayas for their source of water.

It should be noted that the issue of air pollution is one that affects several commitments of the Sustainable Development Goals (SDGs), including: goal 3) ensure healthy lives and promote well-being for all at all ages; goal 11) make cities and human settlements inclusive, safe, resilient and sustainable and goal 12) ensure sustainable consumption and production patterns. Considering Nepal’s pledge to work towards the SDGs as part of its membership with the United Nations (UN), air pollution is clearly a problem that must be addressed more vigorously.

When asked about how Nepal can reduce its air pollution, Bhusan Tuladhar, a prominent environmental activist and Chairperson of Environment & Public Health Organization (ENPHO), said: “There are many options, first of all what is required is commitment. It’s clearly an issue that is of concern for the public health of the people, I would say a major health concern. […] If you look at indoor air pollution, which is more of a problem I would say, then there’s basically three things that we need to look at: the fuel, the stove and the room in which the cooking is done. […] If we want to really tackle air pollution and leapfrog technology really, going electrical would be the gold standard and that’s really for indoor and outdoor as well.” 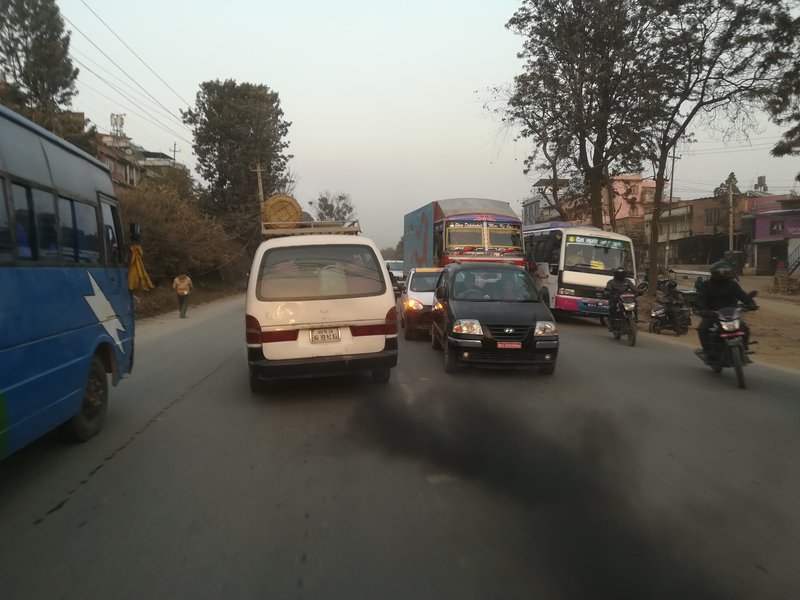 “We know that outdoor pollution, particularly in a place like Kathmandu is mainly due to transportation, so promoting sustainable means of transportation such as walking, cycling, public transportation, electric vehicles would be the way to go. Also, with the traditional cars and so on, there are ways to control air pollution, the emissions from vehicles. For example, the green sticker system that is already in place which basically checks the vehicle emissions and if it is above standards it’s sent back to the workshop. Now that system is in place but it’s not effective so making that effective will go a long way as well.”

“[…] If you look at other sources of air pollution such as brick kilns in Kathmandu, they can be made clean, the technology is available; a lot of air pollution is coming from burning of waste and agriculture residue, that needs to be controlled. All of these issues have been identified and action plans have been formulated, I think it’s up to the government to really get serious on it, implement these plans, invest in these plans. The solution to the pollution is right in front of us in fact, so it’s not like the solution is not available.”

Despite knowing and having all these readily available resolutions, the government seems only focused on infrastructure development, such as the building of roads. Whilst this is important to create accessibility in order to spread development across the whole country, with the ever-present issue of green sustainability, Nepal’s government must better implement its environmental laws from its new constitution. Even just by simply ensuring these regulations are thoroughly enforced with the proper sanctions executed to those that violate them would put Nepal on track towards reaching the SDGs, otherwise it is in danger of undoing all it achieved for the Millennium Development Goals.

Perhaps because the impacts of air pollution are not felt or seen immediately that the issue itself is placed on the backbench of government priorities, but what needs to be realised is that air pollution is a real problem and indeed a slow silent killer. The calamitous consequences of air pollution affect and extends to the country’s current population, the future generations and its beloved Himalayas, all are aspects that are an integral part of Nepal’s development. Without them, the future of Nepal is bleak, therefore, the government should not treat the issue of air pollution lightly. Not just air pollution, but any and all environmental concerns are critical priorities that need to have measures made today. Nepal as a country needs to decide to act now for the betterment of its people, environment and future.

I Miss My Friends In Langtang Every Day... But Today I’m Missing The Langtang Glaciers Too. By Austin Lord 3 months, 4 weeks ago