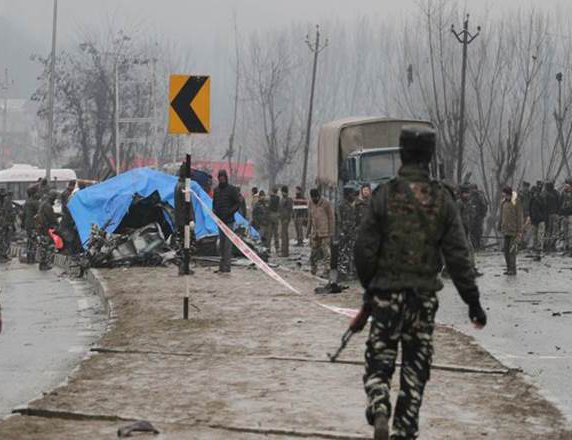 Stunned by the audacious suicide attack on CRPF convoy in Pulwama in Jammu & Kashmir that left at least 39 Jawans dead, Prime Minister Narendra Modi has called for an urgent meeting of cabinet committee on security on Friday morning. Defence minister Nirmala Sitharaman, who was on an official visit to Sweden is rushing back to participate in the high level meeting that will review the lapses and will also mull over the possible response to avenge the attack.

This is not for the first time when Indian security forces have suffered this kind of setback at the hands of Pakistan based terrorists. However, the attack is unprecedented because, the suicide bomber was able to breach the security check points in the heavily guarded national highway to rammed his Tata Sumo into one of the buses in the CRPF convoy.

By any standard, the size of convoy was unusual. Usually around 1,000 Jawans travel in such convoys that are on the move in the terror torn border state. However, this time there were over 2,500 CRPF Jawans who were travelling in the ill fated convoy that was targeted by Jaish-e-Mohammad terrorists.

Officials believe that the preparation for this unusually large convoy might have known to a large number of people that eventually reached to the terror group that planned and executed the attack.

According to sources, Indian intelligence agencies have already received inputs that Jaish-e-Mohammad was arranging large quantities of a powerful explosive but the exact details of their plan was not known to them. Jaish-e-Mohammad was looking to avenge the killing two of its high profile members – Mohammad Usman and Talha by the security forces last year.

Mohammad Usman was nephew of Jaish founder Masood Azhar and his killing was considered the biggest success for the security forces last year.

Despite this information, security forces failed to secure their movement that led to the worst terror attack during Prime Minister Narendra Modi’s tenure. This lapse is similar to the lapse committed by Punjab police in January 2016 when it had received the information from one of its superintendent level officer who along with his two friends and vehicle was abducted by the Pakistani terrorists who had sneaked into the state on the new year eve.

After being released by the terrorists, Salwinder Singh, a superintendent level officer in Punjab police, had immediately informed his superiors that at least four terrorists had entered into the state with the intention to carry out a sensational attack.

Given the location of the terrorists, the Pathankot airbase was their likely target but Indian security apparatus failed to secure the perimeter of the airbase despite the advance warning of an imminent attack. Although, national security advisor (NSA) Ajit Doval had deployed around 150 NSG commandos at Pathankot airbase in anticipation of the attack but presence of NSG commandos and large number of regular army troops had failed to foil the attack.

The country’s security apparatus not only failed to foil the attack but it was equally careless in claiming the success in the anti-terror operation at the airbase. In an embarrassment, home minister Rajnath Singh and the then defence minister Manohar Parrikar congratulated the security forces on Sunday evening when the attack was still ongoing. An embarrassed Rajnath Singh had to delete his tweets the next day when presence of two more terrorists inside the base was confirmed and 4 NSG commandos were injured in the fresh clashes.

It was reminiscent of another serious lapse by the Indian army in the aftermath of Tanda attack in Jammu & Kashmir in July 2003 that almost wiped out the entire top leadership of Indian army’s northern command.

Investigation into the lapses committed by Indian army later revealed that all the top leaders of northern army had rushed to the site after getting clearance from the local commanders. However, a lone surviving terrorist, who was hiding in the thick gross in the camp, killed Brigadier V K Govil, then in charge of the Engineering battalion based at Tanda and wounded then northern Army Commander Lieutenant-General Hari Prasad, Lt. General TPS Brar, the then commander of Indian Army’s the 16th Corps. Three other top officers with key responsibilities in the state had also sustained serious injuries.

An embarrassed George Fernandes, who was in charge of defence ministry at that time, had to assure both Lok Sabha and Rajya Sabha that any security lapse by Indian army would be severely dealt with. Three highly sensational terror attacks during Prime Minister Narendra Modi’s tenure should serve as an eye opener for the country’s security apparatus to revisit its drills and procedures.