Nepal and India Need To Work Together: Minister Gywali

Nepal and India Need To Work Together: Minister Gywali 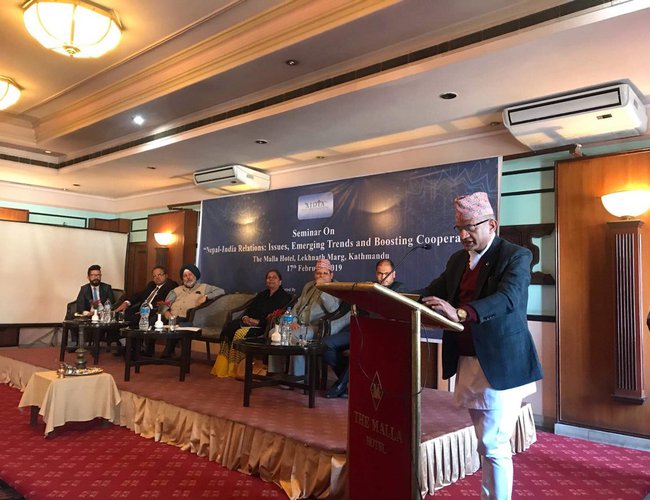 Minister of Foreign Affairs Pradeep Kumar Gyawali said that Nepal and India needed to work together to further their efforts towards a meaningful partnership to tap the immense potential of bilateral cooperation.

Underscoring the need for enhanced bilateral cooperation in the fields of tourism, technology, and trade and transit, Gyawali said that Nepal was looking forward to a strong partnership with India for the country’s economic development.

Organized by the Asian Institute of Diplomacy and International Affairs (AIDIA) in Kathmandu at a seminar on ‘Nepal-India Relations: Issues, Emerging Trends and Boosting Cooperation’, Gyawali stressed the need to address Nepal’s trade deficit with India to create a win-win situation by removing trade barriers, early completion of review of trade treaties, and forging partnership between private sectors of the two countries.

Indian Ambassador to Nepal Manjeev Singh Puri said that strong people-to-people relations between the two countries would define the future of Nepal-India relations.

Ambassador Puri underscored the need for continued dialogues to further strengthen relations between Nepal and India. Puri said Nepal should identify other areas of comparative advantage such as hydropower and tourism and focus on them to bring down the trade deficit and benefit from the fastest-growing Indian economy.