Total Dhamaal movie review: The only people who prevent you from strangling yourself is the forever-bickering couple played by Anil Kapoor and Madhuri Dixit. 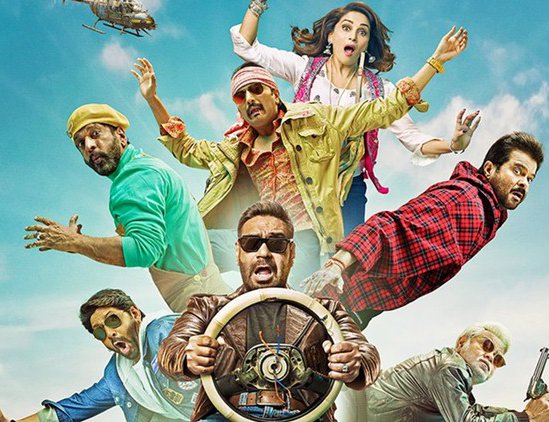 Total Dhamaal movie rating: One and a half stars

Total Dhamaal is nothing but a string of random sequences, shot in water and on land, desert and sky. Sanjay Mishra keeps saying ‘bro’: he doesn’t, in my hearing, say ‘yo’. Boman Irani vamps it up, in a sharp little moustache. Arshad Warsi and Jaaved Jafferi twin, inhabit mostly flatness, making me wish for the hundredth time that these two sharp comic talents get a movie which gives them something, anything, to do, other than being chased by computer-generated vultures (yes, this happens).

Brainless comedies can be a lot of fun (brain, stop smirking), but they need to be written with smarts. Here, the CGI animals (the climactic chunk of the film is set in a zoo) have more effect than the humans. A rhino’s horn becomes a pointed spear for falling backsides. A chimp and an elephant are used to give us lessons on kindness.

Meanwhile, the tasteless jibes against women, a trademark of the Dhamaal franchise, pile up: ‘kaamwaali bais’ are fine, wink wink, wives are of no use, girls are ‘paisa udaane waali cheez’.

About the only people who prevent you from strangling yourself is the forever-bickering couple played by Anil Kapoor (motabhai, husband) and Madhuri Dixit (Marathi mulgi, wife). They have an easiness between them which comes of long years of working together, and watching Dixit, unburdened from the weight of looking glamorous, reminds you of the powerhouse she used to be. These two deserve a film of their own.