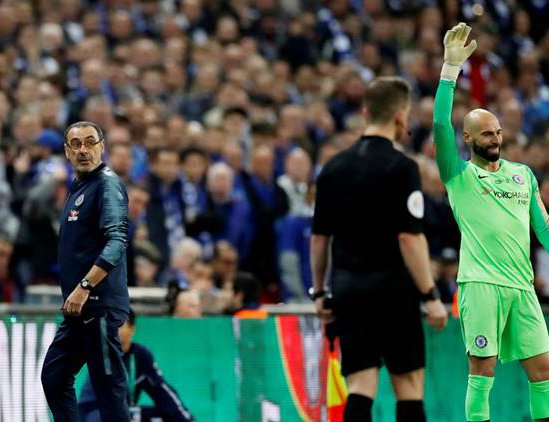 Chelsea goalkeeper Kepa Arrizabalaga appeared to openly defy his manager Maurizio Sarri during Sunday’s League Cup final defeat by Manchester City on Sunday (February 24), refusing to be substituted near the end of extra time at Wembley. In one of the strangest incidents ever seen in a final of an English competition, the repercussions for both people involved could be serious.

Near the end of extra time, with the final locked at 0-0, Kepa was troubled by hamstring problems and the Italian tried to replace him with Willy Caballero.

But Kepa, the world’s most expensive goalkeeper after joining Chelsea for 80 million euros, refused to leave the field – wildly indicating to the touchline that he wanted to continue. Publicly humiliated, Sarri was furious on the touchline and initially headed down the tunnel before returning for the end of 120 minutes and the penalties.

In the shootout, Kepa made only one save from Leroy Sane and Raheem Sterling completed a 4-3 victory on penalties to keep City in contention for a quadruple.

It leaves Sarri without a trophy in his career and Kepa’s defiance only adds to his manager’s problems with Chelsea down to sixth in the Premier League.

Later, Sarri said Kepa’s refusal to be substituted was the result of a “big misunderstanding”, while adding that the Spaniard “was right but in the wrong way”.

“It was a big misunderstanding because I understood that he had a cramp. So I didn’t want a keeper (to) go to penalties in that physical condition,” Sarri told reporters. “The goalkeeper wanted only to let me know that he was in condition to go to the penalties,” the Italian said. “It was only a big misunderstanding. Kepa was right, but in the wrong way.”

Sarri said he would talk to the Spaniard about what happened. “I want to talk with him because he needs to understand that for a misunderstanding we can (get) in trouble, especially with you,” he told the reporters. “So I think I have only to explain exactly the situation to Kepa, but without any other problem.”

Former Athletic Bilbao keeper Kepa backed Sarri’s comments, confirming it had been a misunderstanding, although he admitted the situation had looked bad. “In no moment was it my intention to disobey, or anything like that with the boss. Just that it was misunderstood,” he said in a statement on Chelsea’s website.

“I know if you see it from outside, I don’t know how it went out, it is not the best image. I have spoken with the boss. I think it was misunderstood. I understand that on television, on social media, they’re talking about this. We have spoken now, and I was only trying to say I’m fine. He thought I wasn’t fine,” he added.