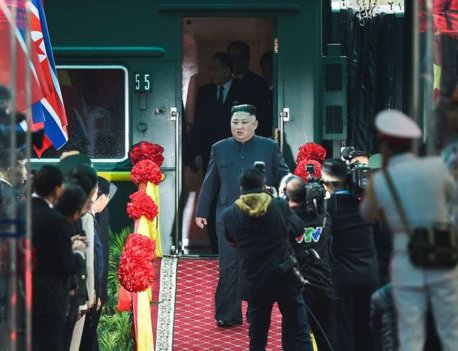 North Korean leader Kim Jong-un has arrived in Vietnam for a summit with US President Donald Trump later this week.

The second US-North Korea summit follows a historic first round of talks last year in Singapore.

Kim's green and yellow train pulled into Dong Dang station, and he has already begun the final leg of his journey to Hanoi by car.

Ceremonial guards and flag-waving crowds lined a red carpet laid out for him at the station.

Security guards, officials and cameramen crowded Kim and his party as they disembarked from the train and were ushered into a waiting car.

Kim then paused in front of the crowds for a brief moment, sticking his hand out of his limousine window to wave.

His trademark team of black-suited bodyguards were waiting for him at the station, and as his car pulled away they briefly ran alongside it.

He is thought to be travelling with his sister Kim Yo-jong and one of his key negotiators, former General Kim Yong-chol. 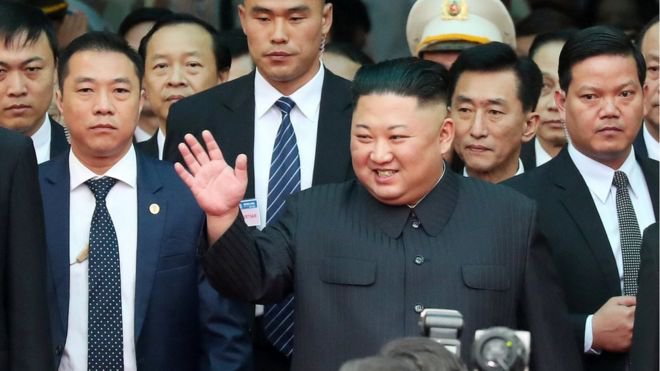 Why did Kim take a train to Vietnam?

The journey from Pyongyang to Vietnam took more than two days and traversed about 4000 km (2485 miles). Had Kim chosen to fly to Vietnam he would have got there in a matter of hours.

Vietnam's Dong Dang station was also closed to the public ahead of his arrival on Tuesday morning. He is now being driven around 170km (105mi) to Hanoi by car.

It's little surprise that Kim chose to take the train as this is how his grandfather, North Korea's first leader Kim ll-sung, travelled when he went to Vietnam and Eastern Europe.

That alone would have made it a highly symbolic move for the younger Kim.

Kim's private green and yellow train has 21 bulletproof carriages and is luxurious, with plush pink leather sofas and conference rooms so the journey would not have been unduly uncomfortable.

What will Trump and Kim do in Vietnam?

Trump is scheduled to arrive later on Tuesday and details of their schedule are only just becoming clear.

Trump will meet Kim for a brief one-on-one conversation on Wednesday evening and then they will have dinner together with their advisors, according to White House spokeswoman Sarah Sanders. On Thursday, the leaders will meet for a series of back-and-forth meetings.

US Secretary of State Mike Pompeo also arrived in Hanoi on Tuesday.

Situation In China-India Border Area Is Stable And Under Control: Chinese Foreign Ministry By NEW SPOTLIGHT ONLINE 1 day, 6 hours ago

Japan To Lift State Of Emergency For All Areas By NEW SPOTLIGHT ONLINE 4 days, 5 hours ago