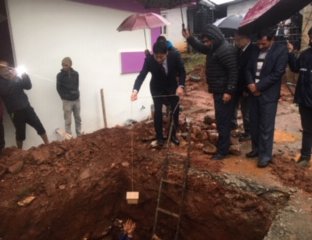 Medical Attaché of the Embassy of Japan to Nepal Dr. Atsumi Shimizu participated in a cornerstone laying ceremony for the construction of an emergency department building for Chaurjahari Hospital in West Rukum District.

The grant contract was signed between the Embassy of Japan and Human Development and Community Services, a local NGO that runs the hospital, on 14th December, 2018 in Kathmandu. Dr. Kenjiro Narato, a Japanese family doctor who has been supporting the Chaurjahari Hospital, also participated and wished a smooth start of the project.

The Project for the Construction of an Emergency Department at the Chaurjahari Hospital in West Rukum District is funded under the Grant Assistance for Grassroots Human Security Projects (GGP) of the Japanese Government. The total grant assistance is USD 87,755 (approximately NPR 9.5 million). 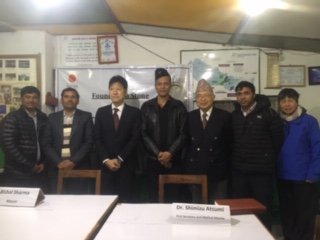 The project will support the construction of a new building for the emergency department of the hospital. Currently, the hospital does not have an emergency room, thus, critical care patients undergo treatment either in a temporary room or a general consultation room. This sometimes causes dangerous and unhygienic situations for patients, particularly since the hospital receives almost 200 patients per day. The implementation of the project will enable patients to receive treatment in a safer and more hygienic environment and allow doctors to provide more effective and appropriate medical responses.

Human Development and Community Services established Chaurjahari Hospital in 1993, and since then the hospital has been contributing to the health of a great number of patients. The hospital receives patients not only from Rukum District but also from neighboring districts such as Dolpa, Salyan, Mugu, and Jajarkot. The number of patients in the past few years has exceeded 45,000 per year. Due to a lack of medical institutions in their vicinity, some patients reach the hospital by walking for several days in order to seek treatment.

"The Embassy of Japan hopes that this project will contribute towards enhancing the emergency medical services in remote areas and will assist towards reducing the mortality rate of the Mid-Western Region of Nepal. The Embassy also hopes the assistance will contribute to enhancing the bilateral relationship between Japan and Nepal," said Embassy of Japan in its press release.

Chinese Embassy Issues A Strong Protest Against An Article Published In English Daily By NEW SPOTLIGHT ONLINE 4 hours, 51 minutes ago