Trump And Kim Fail To Reach Deal At Second Summit

Trump And Kim Fail To Reach Deal At Second Summit 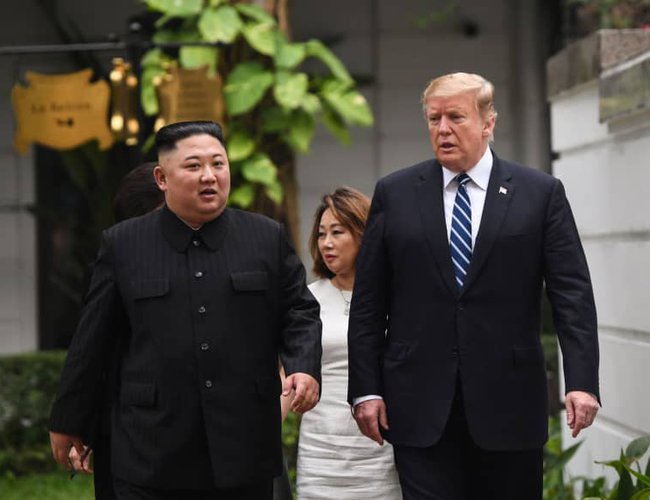 Trump told a hastily organized news conference in the Vietnamese capital that while the talks had faltered, “we had a really, I think, productive time.”

He said the talks at the second summit, some eight months since the two leaders’ landmark first meeting in Singapore, had been derailed over the U.S. side’s refusal to completely ease crushing U.N. and unilateral sanctions.

“It was about the sanctions,” Trump said. “Basically they wanted the sanctions lifted in their entirety, and we couldn’t do that.”

The revelation came after the two sides earlier cut short their summit, including a planned lunch and “joint signing ceremony.”

Trump attempted to put an optimistic shine on the rift, noting that the two sides had parted ways amicably and revealing that Kim had vowed “no testing of rockets or missiles or anything having to do with nuclear.”

The North’s last nuclear test, in September 2017, was also its sixth and largest. Its last ballistic missile test was in November that year, when it tested a long-range missile that experts say is capable of striking much, if not all, of the continental United States.

But Secretary of State Mike Pompeo said that Washington asked Kim “to do more. He was unprepared to do that.” Pompeo also noted that “timing and sequencing issues” had failed to meet the expectations of U.S. negotiators.

“We just felt it wasn’t appropriate to sign an agreement today,” Trump said. Neither Trump nor Pompeo noted what exactly Kim had refused to do, but the president indicated the North Korean leader wouldn’t agree to proceed as far toward abandoning his nuclear program as the U.S. demanded in exchange for sanctions relief.

In Tokyo, Prime Minister Shinzo Abe praised Trump after the news for “not striking an easy compromise” on the denuclearization issue.

“With a strong determination to realize denuclearization, (Trump) didn’t strike an easy compromise,” Abe told reporters after a telephone conversation with the U.S. president. “I support Mr. Trump’s decision.”

The prime minister also said Trump had explained Abe’s stance on the issue of Japanese nationals abducted by North Korean agents during the one-on-one meeting with Kim.

“Next, I myself must face chairman Kim Jong Un” to resolve issues related to Japan, he said.

Abe has made addressing the issue of Japanese nationals kidnapped by North Korean agents in the 1970s and 1980s one of his administration’s top priorities.

Despite the talks’ breakdown, some analysts said Tokyo “will not be unhappy with this outcome.”

At his news conference, the U.S. leader also said Kim had offered to dismantle North Korea’s Yongbyon nuclear facility, but “it wasn’t enough.” Pompeo said even without Yongbyon, the country would still possess missiles, warheads and other elements of a nuclear program that were unacceptable to Washington.