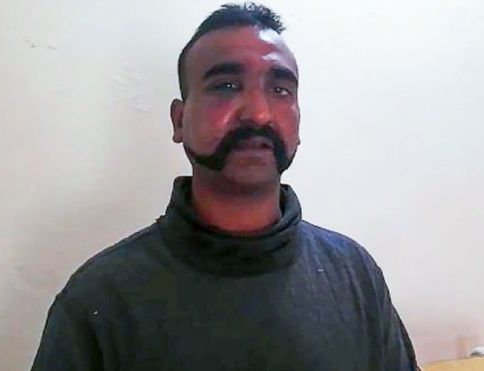 Pakistan will release a captured Indian pilot as a "peace gesture" on Friday, Prime Minister Imran Khan has said.

Mr Khan revealed the decision in parliament, saying that Pakistan was focused on de-escalation. India's military welcomed the Pakistani move.

Pakistan shot down the pilot's jet on Wednesday, as tensions rose with India over the disputed region of Kashmir.

The capture of Abhinandan Varthaman was a major setback for India. Both sides are under pressure to calm tensions.

At Thursday's news briefing in Delhi, Indian Air Force officials said they were "extremely happy" that the pilot would be released.

On Tuesday, India struck what it said was a militant camp in Pakistan in retaliation for a suicide bombing that killed at least 40 Indian troops in Kashmir on 14 February.

A Pakistan-based group said it carried out the attack - the deadliest to take place during a three-decade insurgency against Indian rule in Kashmir.

Pakistan - which denies any involvement in the 14 February attack - said it had no choice but to retaliate to the Indian raids with air strikes on Wednesday. That led to a dogfight and the Indian fighter jet being shot down in Pakistan-administered Kashmir.

Tens of thousands of troops remain positioned on either side of the border in the disputed region.

At the height of the tension Pakistan closed its airspace, disrupting major air routes, but is expected to reopen it on Friday.