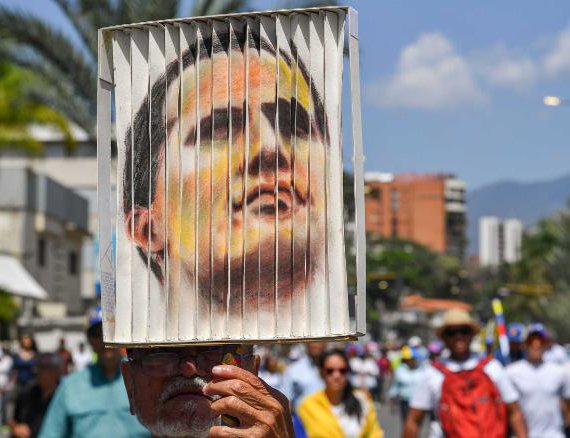 He told his supporters at the airport he "knows the risks" they face, and urged Venezuelans to join anti-government protests this week.

President Maduro has so far resisted all calls for him to step down as leader in favour of Mr Guaidó.

Guaido was met by crowds of chanting supporters and several European diplomats after he touched down at Caracas airport on Monday, where he declared, "We are here in Venezuela. We are stronger than ever."

"We are going to achieve the end of the usurpation very soon in Venezuela," he said. Guaido added that despite the risks, "they won't be stopped."

He climbed on top of a car, waving the Venezuelan flag and shouting "Yes we can!" before heading to a plaza in the capital, where he was welcomed by huge crowds.

According to a senior aide, Guaido returned to the country on a commercial airline, Copa Airlines, from Panama City.

A Guaido supporter in Caracas on Monday.

Guaido's homecoming has reignited the opposition and could become the next flashpoint in his struggle for power with Maduro, who is facing international pressure to step down amid a mounting humanitarian crisis. Most Western countries and regional neighbors now recognize Guaido as Venezuela's leader and have been working with him to bring aid into the country.

Thousands of Guaido's supporters gathered for a rally at Plaza Alfredo Sadel on Monday to hear the opposition leader speak.

Greeted by raucous cheers and applause, Guaido told demonstrators: "They threatened to throw me in jail, to kill me. It will not be through persecution or threat that they will detain us."

Calling those assembled his "brothers," Guaido encouraged people to take to streets in protest against Maduro's rule on Saturday, saying, "the dream of our future is to be able to recuperate our country."

Protesters gather for a rally to demand the resignation of Venezuelan President Nicolas Maduro in Caracas on Monday.

Protesters gather for a rally to demand the resignation of Venezuelan President Nicolas Maduro in Caracas on Monday.

The 35-year-old National Assembly leader calls Maduro a "usurper" and rejects his election last year as illegitimate. But the beleaguered president has remained defiant, denying that a humanitarian crisis exists in his country and suggesting that aid efforts are part of a US plot to orchestrate a coup. 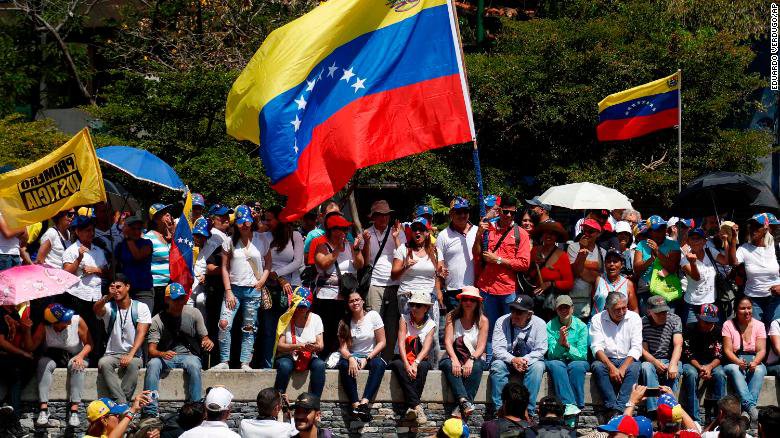 Maduro still maintains control over the Venezuelan military, whose senior leaders appear to remain loyal to him.

Guaido left Venezuela for Colombia in late February to usher much-needed food and medical supplies across the border, in defiance of Maduro's wishes. A face-off over the humanitarian aid quickly turned violent, with hundreds hurt in clashes with the Venezuelan National Guard.

After his efforts were stymied, Guaido embarked on a South American tour, meeting the presidents of Colombia, Brazil, Paraguay and Ecuador, along with United States Vice President Mike Pence -- ignoring a travel ban imposed on him by his country's Supreme Court.

Earlier on Monday, Guaido announced his planned return to the crisis-stricken country in a tweet which included a SoundCloud audio message.

Juan Guaido is greeted by supporters upon his arrival in Caracas on Monday.