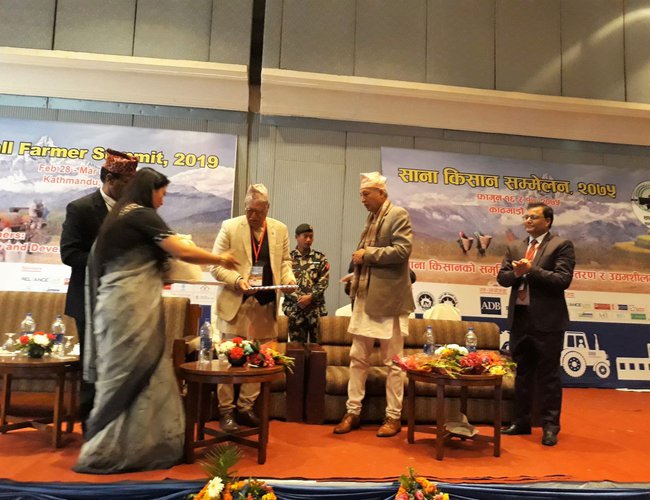 After successfully hosting the first Small Farmer's Summit in 2014, SKBBL hosted the second summit successfully, sending a message to its million members that there is someone to take care of them.

Inagurated by Prime Minister K.P. Sharma Oli, the two days summit concluded giving the message about the importance of small farmers in the country's economic development.

In his address, Prime Minister Oli made it clear that the government will provide the needed support to organisations like SKBBL, urging small farmers to work to bring prosperity in the country.

Addressing the opening program, CEO Shiva Ram Prasad Koirala highlighted the importance of this kind of summit to give exposure to small farmers living in far remote parts of the country.

In the summit attended by over 15 hundred farmers and other stake holders, more than two dozen papers were presented in an interactive program. Announcing the declaration, SKBBL has expressed its commitment to reach more small and poor farmers to alleviate poverty in the country.

Although some progress has been made in poverty reduction in recent years, Nepal remains one of the poorest countries in the world, with a Human Development Index of 0.574, placing it in 149th position out of 189 countries listed in United Nations Development Program's Human Development Report 2018. Despite the declining poverty of Nepal, that has come down to 23.8 percent at present, inequalities in accessing resources by the poor and, the gap between the rich and the poor have still continued to widen. Recent surveys have shown that the 10 percent of the urban poor and the 35 percent of the rural poor live below the poverty line.

The achievements made by the community based SKBBL and community based Small Farmers Agriculture Cooperatives (SFACLs) targeted to alleviating rural poverty strongly indicate that this change would be possible with an appropriate program to help improve the socio-economic condition and uplift the lives of the rural poor.

The two-day interaction was lively as it gave the opportunity to the small farmers to see how they can produce products for even five star hotels. Similarly, the knowledge and idea delivered at the summit also helped to review the policies and programs related to small farmer development and micro-credit.

By bolding the summit, SKBBL has shown that it is the institution helping the poor farmers to uplift their livelihood.

Nepal And India To Give Priority To Butwal-Gorakhpur Transmissionline By NEW SPOTLIGHT ONLINE 3 days, 8 hours ago

UNHCR Shut Down Its Bhutanese Refugee Office In Nepal By Agencies 3 days, 23 hours ago