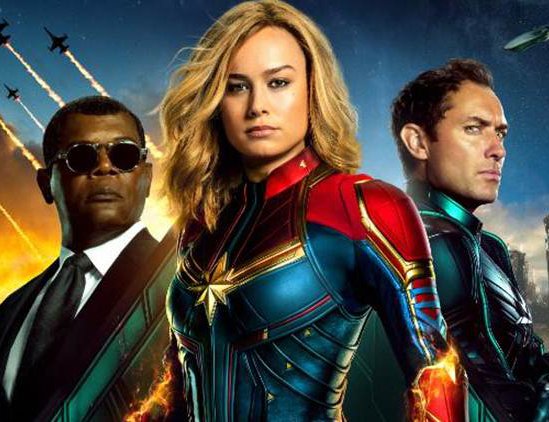 Marvel Cinematic Universe finally has a woman superhero, and she arrives on the scene kicking some real ass. While Brie Larson would seem an unlikely choice to play her — known best for her Oscar-winning performance as a mother held captive in Room — she brings to the role a welcome mix of innocence and resolve, vulnerability and determination. Larson also shares a lovely chemistry with Jackson, playing a young Agent Fury with some digital help. This is the longest role for Fury in all the Avengers films so far, and Captain Marvel uses him well to both give him and Captain Marvel an engaging origin story.

It’s also an origin story with a difference, as we meet Larson first as Vers, a member of the Kree Civilisation’s ‘Starforce’. Given her powers that involve her shooting photon lasers from her hands, Vers is being mentored by Yon-Rogg (Law) as one of the prime soldiers for Kree. The Krees, in turn, are fighting the Skrulls, led by Talos (a wonderful Mendelsohn), who it seems have been exterminating species across planets and seizing control. But the dreams that she dreams and the flashbacks that she has have Vers convinced there is more to her than this life.

Writer-directors Anna Boden and Ryan Fleck keep the action moving fast and do not linger over any episodes. While this is confusing at first, with one barely getting a chance to get one’s head around the ‘Supreme Intelligence’ that commands Kree or the code of honour and complete subservience that it demands of its soldiers, the film settles into a nice groove when — after some eye-blinding inter-galactic collisions — Vers finds herself on ‘C-53’. That being another name for Planet Earth.

Unlike what you would expect from other films of such like, Vers is quite comfortable in her new circumstances, armed with superior technology and powers, and a ‘universal translator’. Both the Skrulls and Kree chase her to Earth, and even as she is bonding with Fury, she must deal with them. Captain Marvel deploys humour and music to take us back to that 1990s world in which Vers finds herself — including a ‘top-notch’ pager, dial-up Internet, and slow-loading CD-Roms.

In the race for superhero big bucks, DC Comics has mostly played catch up with Marvel. However, Wonder Woman was an exception, with the charismatic Gal Godot bringing some magic to that universe. Larson doesn’t have that star power, but in precisely that, the film scores several points towards getting women a toehold in this world. Subtly but surely, women like us are the heart, soul, brains and brawn of Captain Marvel.

That includes Bening as Dr Lawson, holding the key to the entire inter-galactic fight; Larson as Vers/Carol Denvers in her Earth life as a girl who did ‘boy things’, and a pioneer pilot who fought against odds to be in the US Air Force; her best friend Maria (Lynch), who is a single mother and as much a warrior, and whose daughter hints at “things to come”; and that includes the cat (or is it?) called Goose who almost steals the entire show.