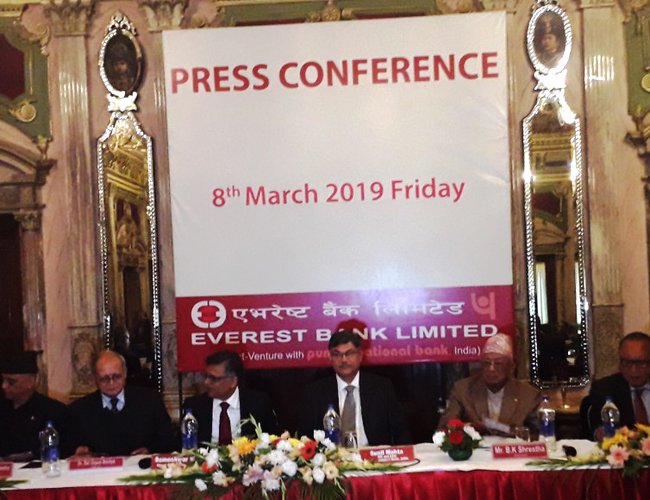 Everest Bank Limited (EBL) established 25 years ago joined hands with PNB as a Joint Venture Partner.EBL has now 92 Branches and has served its customers well. The customer base of EBL exceeds 10 lacs, one of the highest in the country.

PNB is a 124 years old bank which started business on 12th April 1895 at Anarkali Bazar Lahore. Late Lala Lajpat Rai a well known freedom fighter of India was one of the founders of the bank.

PNB, after partition of India in 1947, came to New Delhi (India) from Lahore. Thereafter, the Bank took its roots in India and has expanded. Today, PNB is the second largest Bank in India. PNB has business of more than 10.84 lac crores with more than 7000 Branches and 9000 ATMs. PNB has a wide network of 14 training centres across India, including training facility in Information Technology.

EBL has now 92 Branches and has served its customers well. The customer base of EBL exceeds 10 lacs, one of the highest in the country. EBL now has Regional Offices (Mini Head Offices) already established and operational in all the seven Provinces

The purpose is that the Branches and the Regional Offices can take many decisions without referring the matter to Head Office for quicker decision and actions.

EBL has been paying to its dedicated Staff and Officers – perhaps the best remuneration in the country and among all the Banks.

Similarly, EBL has been serving its Shareholders handsomely. The total investment from a Shareholder, amounting to Rs.13500 from the beginning till now, has multiplied more than 25 times and present value of these Shares amounts to almost Rs.3,45,800. Details are given in the Annexure attached herewith.

Nepal should further have Industrial Estates at strategic locations, such as Nepal Ganj, which is just north of Lucknow – Kanpur Industrial Complex.

India has more than 30 States. Some of them much bigger, both in size and population, like, Uttar Pradesh, Madhya Pradesh, Maharashtra etc. However, for Nepal, India means North Indian States bordering Nepal, such as, Bengal, Bihar, Uttar Pradesh and Uttarakhand.

To be near to Industrial / Commercial Complex is important for new Industries. For example, such centres will have transportation hub. An industry quite often requires raw materials / packing materials to be brought from various parts of India and Finished Goods have to be similarly transported to all over India. Hence, transport hub is important. In North India, after the Kolkata Industrial Complex, the first Industrial Complex is Lucknow / Kanpur. Thereafter comes Delhi with Gurgaon / Faridabad/ Ghaziabad / Noida etc.

Under this, real-time fund transfer facility is being provided to Nepalese migrant workers to facilitate their income back home. The facility is available through all 7000+ branch locations of PNB and more than 8000+ business correspondents. Remitters having account with PNB can even process their remittance payment through internet banking portal and mobile application of the Bank. Remitters maintaining account with other Banks in India can also process Indo Nepal remittance through PNB by depositing cheque of their account maintained with other Banks.

Under this facility, the ATM card of EBL can be used in all the ATMs of PNB in India and the ATM card of PNB can be used in all the ATMs of EBL in Nepal. This service has facilitated tourists, business persons and individuals who frequently travel Nepal or India by providing hassle free services. Also, this facilitates thousands of Nepalese students studying in India as they can use EBL’s ATM cards in any of the PNB ATM, so that their guardians do not have to remit money every month.

EBL and PNB has launched a saving product to facilitate Nepal Domicile Indian Gorkha Soldiers where a twin / linked account will be opened on both PNB and EBL with free remittances service between the accounts. The saving account will serve as salary account and pension account after the retirement. The soldiers will be issued Co-branded Debit Cards of PNB and EBL which will facilitate easy cash withdrawl in both countries without any service charges. Soldiers will also be eligible for housing loans, pension loans and other loans at concessional rates and service charges.

Everest Bank Ltd. is also doing which we consider “ valuable work” in the area of CSR (Corporate Social Responsibility). We are concentrating on the following two areas:

Nepal Rastra Bank has asked all the Banks to spend 1% of their profit for such CSR. If all the Banks contribute the same in various important fields instead of waiting for the Government to do, it will be excellent. We have started doing our part.

TRISHULI RIVER BASIN Call For Protection By A Correspondent 1 week, 1 day ago