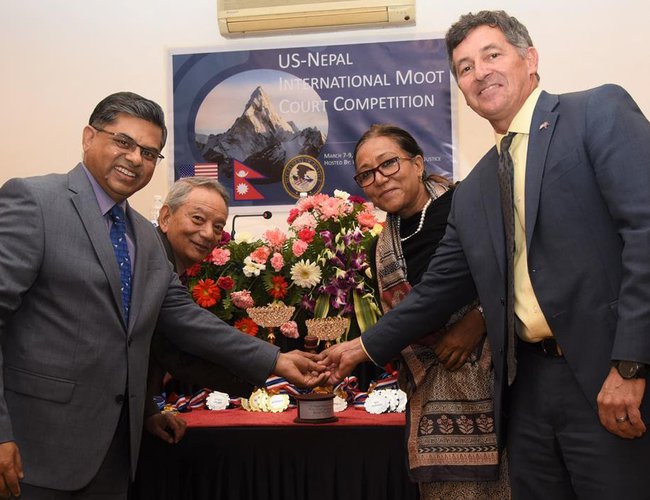 Thirty law students from five law schools of Nepal and one from the United States are arguing on complex legal issues before distinguished judges at the Second Annual Moot Court Competition from March 8-9 in Kathmandu.

Speaking at the opening ceremony of the Competition on March 7, U.S. Ambassador to Nepal, Randy Berry said, "It’s exciting to be among an energetic group of aspiring young attorneys who are ready to dive into this challenging competition where the results are not judged by flashy style and drama, but by the ability to effectively articulate sophisticated legal concepts both in writing and orally before panels of tough judges." Supreme Court Justices Anil Sinha and Sapana Malla, and former Supreme Court Justice and Executive Director of the National Judicial Academy Top Bahadur Magar, also delivered key remarks at the event.

According to a press release issued by The U.S. Embassy in Nepal, the competition is designed to strengthen the core advocacy skills of aspiring attorneys by exposing them to the rigors of international legal advocacy competitions. Judges for the competition include acting Nepali judges and the Deputy Attorney General, among others.

In 2018, Nepal Law Campus was awarded the Best Team followed by Howard University School of Law of the United States.

More Cylinders Will Be Brought From China Via Tatopani Border: Foreign Minister Gyawali By Agencies 19 hours, 38 minutes ago