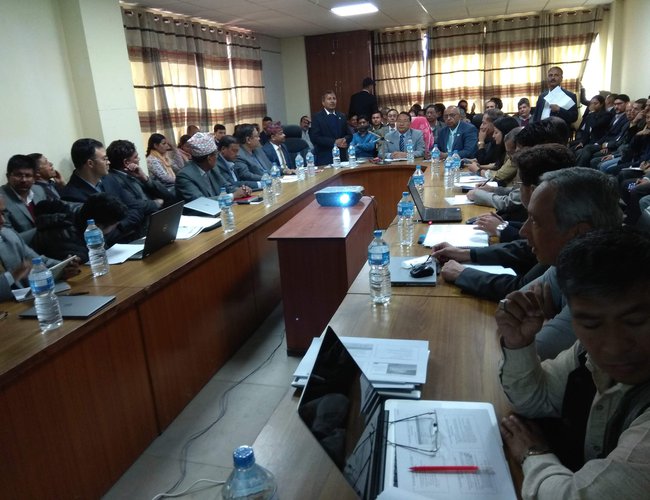 Announcing a major decision, minister for Energy, Water Resources and Irrigation Barsha Man Pun expressed the commitment that the government will purchase all the electricity generated by hydro power projects.

At a time when the time limit of take or pay system, under which Nepal Electricity Authority (NEA) is paying money without consuming the power generated by hydro power projects, is expiring, minister Pun has urged all investors to invest in hydro power not taking any doubt.

Minister Pun announced this in a program organized by Department of Electricity Department to discuss the problems faced by hydro power developer and solve them. He also said that the government will announce special program for Energy Decade in coming budget.

Minister Pun also said that the government is planning to generate 15000 MW of power in ten years. Under this scheme, NEA has decided to sign PPA for 5250 MW run of the river in take or pay. Similarly, NEA has also decided to sign PPA of 5250 MW for storage and 4500 MW for picking projects.

Minister Pun said that the government will solve the current problems related to queering of sand, stone and soil coordinating with local levels giving them sense of ownership. Many local levels have been issuing order to halt the queering activities demanding the due revenue for queering for such project as their areas.

During the discussion promoters have urged minister to solve the present deadlock between developers and local levels regarding the use of sand and stone and other construction materials. They demanded the free access in such materials.

Minister Pun also has made it clear that the current problems related to construction of transmission line will be solve soon and investors will not have to face any problems in future so far as evacuation of the electricity is concerned,

He also said that the problems between developers and Ministry of Forest and Environment regarding the use forest land will be solved.

Department has invited 15 developers constructing hydro power over 25 MW for the discussion.

Ethiopian Renaissance Dam Controversy: Egypt And Sudan For More Negotiations On Flow of Water In Nile By Agencies 2 weeks, 3 days ago