Upper Tamakoshi Is In The Right Track, Reaching All 74 Pieces of Pen-stock Pipes At Project Site

Upper Tamakoshi Is In The Right Track, Reaching All 74 Pieces of Pen-stock Pipes At Project Site 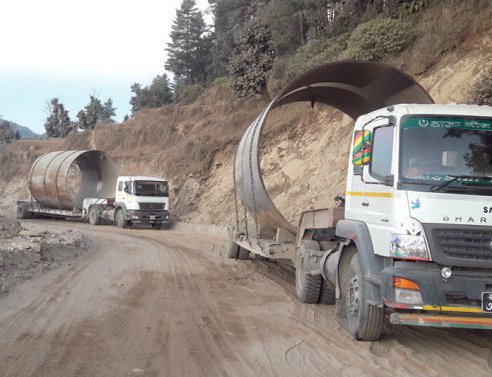 After the completion of the transportation of penstock pipe, Upper Tamakoshi Project has completed one of the most difficult task of the project. Under the lot 2 of the project, five meter long 74 pieces of pipe, which will be used in lower penstock, has already reached in project site Gonger.

Works of the project halted months due to lack of expertise of Indian Contractor Texamo. The work finally started installing penstock pipes after a new contractor took charge of the construction of the plant.

With the request of UTHL, Texamo and Andritz signed a tripartite agreement in January, 2019 under which the Indian firm subcontracted the penstock installation part of the job to the Austrian company.

Immediately after signing the pact, Andritz mobilized workers at the project site and construction work resumed.

“Andritz Hydro has transported all the pipes and equipment to the project site and started installation work,” said Bigyan Prasad Shrestha, project chief of Upper Tamakoshi. “We are on track to meet the completion deadline of November set by the government.”

The national pride project located in Dolakha district in north central Nepal plans to start commercial generation of electricity by mid-November after revising its completion deadline for the third time.

The penstock pipe conveys water from the reservoir to the turbines to generate electricity, and fitting such pipes is considered to be one of the most challenging tasks of the hydro-mechanical component.

At a time when delays in the execution of the hydro-mechanical component threatened to push back the completion date of the project, the reaching of all penstock pipe give hopes that the project will start generation in time.

Work had halted for months at the construction site of the 456 MW scheme because the Indian contractor for the hydro-mechanical component, Texamo Railway Engineering, lacked expertise to implement the complex task.

The project has faced cost overruns due to delays. It was initially planned to be built at a cost of Rs. 35 billion, but the final bill is now expected to reach Rs. 70 billion, if interest is added.

The project is considered to be a model project which is being developed with domestic resources and a high level of participation by project-affected locals and the general public.

Spokesperson of the project Dr. Ganesh Prasad Neupane told Gorkhapatra daily that the pipes were stored in Sunkoshi Power House in Sindhupalchwok for long period.

Ethiopian Renaissance Dam Controversy: Egypt And Sudan For More Negotiations On Flow of Water In Nile By Agencies 3 weeks, 2 days ago

Bhutan Looks At Renewable Energy To Meet The Demands In Winter By NEW SPOTLIGHT ONLINE 3 weeks, 6 days ago