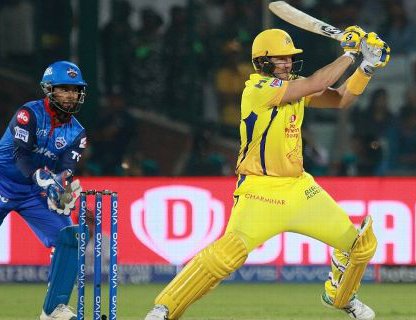 This encounter was billed as one between the youthful exuberance of Delhi Capitals and the vast experience of Chennai Super Kings, and the result added substance to the suggestion that T20 is not necessarily a young man's game.

Shikhar Dhawan's fifty kept Delhi ticking after they opted to bat in their first home match of the season, but they unraveled to Dwayne Bravo at the death and their 147 for 6 never looked like it was enough despite the slowness of the track at the Feroz Shah Kotla. Shane Watson's rapid 44 put Super Kings well ahead of the asking rate, and by the time the paterfamilias himself, MS Dhoni, walked in, they needed under five an over. Dhoni took it deep - at one point calmly patting away five dots in a row - and let the game go into the final over before Bravo sealed Super Kings' second win in two, and sixth victory out of eight matches at this venue.

Chahar reins them in

On a pitch that historically favours spinners even more strongly than even the MA Chidambaram Stadium, the scene of the season opener, Delhi might have been looking to get after Deepak Chahar and Shardul Thakur as the potential weak links in an otherwise impregnable attack. A spring-loaded Prithvi Shaw spanked three fours in a row in Thakur's first over, but by the end of his opening spell, Chahar had more than repaired the damage.

As he had done on Saturday night, Chahar bowled all four up front and maintained control throughout, sending down 12 dot balls and striking the vital blow when he cramped Shaw for room and a spliced pull was caught at midwicket. By the time Chahar was done at the end of the seventh over, Delhi's run-rate was a modest 6.85, and with Harbhajan Singh, Imran Tahir, Ravindra Jadeja and Bravo to come, any attempt to up the rate would not be an easy one.

With the first innings having demonstrated the need for top-order solidity, Watson v Rabada was set up as a key battle as Delhi desperately hunted an inroad into an experienced line-up. The spark between the two was lit in Rabada's first over, when Watson backed away into a bouncer as the South African quick focused on two lengths: at the boot or at the head. Watson glanced a 150km/h yorker for four and top-edged a bouncer to further rile Rabada up, and at one point the two engaged in what looked like a heated exchange. As much as he tried to force the issue, Rabada's pace was defanged by the slow track and he just couldn't break through.

It's the middle overs that Watson dominated last season, striking the ball at over 200 after the Powerplay in overs 7 to 15, but this time around he did the damage in the Powerplay. By the time he fell, stumped off an Amit Mishra ripper, the required rate was well under a run a ball and with the resources at Super Kings' disposal, it looked like the rest of the chase would be a doddle.

The questions about Dhoni's starting against spin might have grown a little louder had he edged his first ball to slip, rather than over him and away for four. Super Kings needed 50 from 58 when Dhoni entered, numbers which seemed almost too easy for a player of Dhoni's legendary vintage in white-ball chases. When no further boundaries had been hit seven overs later, Dhoni might have been the only person at the Kotla who wasn't starting to get a little edgy, but just as things were starting to get tight again, Dhoni did as Dhoni does, slashing Keemo Paul through cover and shellacking Mishra over wide long on as though he'd had planned it all this way. Graciously, he left it to Bravo to hit the winning runs, but remained not out at the end for the 39th time in a successful IPL chase.