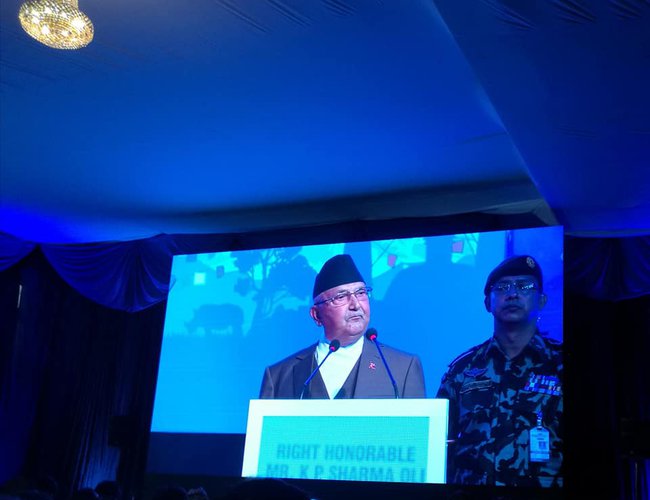 Prime Minister K.P.Sharma Oli has said that Nepal has all the conducive environment for investment arguing that Nepal does not fear, risk and violence any more.

Addressing inaugural session of Nepal Investment Summit at Soaltee Crown Plaza, Prime Minister Oli said that Nepal is a secure place for the investment saying that the current government is ready to do everything for investment. "I have a dozens of basis to prove that Nepal is safe for foreign investment, first and foremost is political stability, second target for double digit, amendment of old acts and promulgation of new acts, zero tolerance in corruption, transparency rule of law and good governance," said prime minister Oli.

He said that Nepal is moving ahead with a slogan of prosperous Nepal and happy Nepali. " Don't be late, come and investment in Nepal, There are enormous opportunities," said PM Oli. "Come to Nepal with big investment, we will provide you necessary security and incentives."

Addressing the inaugural program, Finance Minister Dr. Yuba raj Khatiwada said that Nepal is aspiring to be a middle income economy by 2030 and country required enormous investments to achieve it. 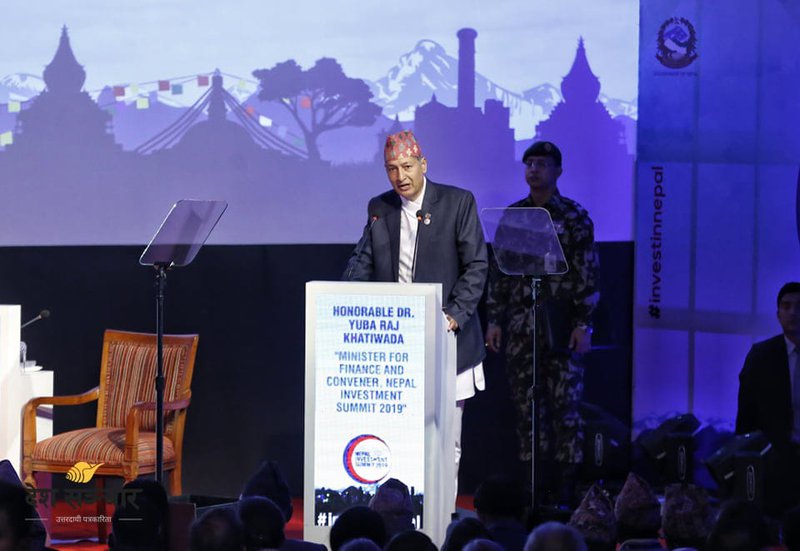 He said that the government has already amended numbers of acts and regulations to make Nepal a investment friendly country. During the program Vice president World Bank, Asian Development Bank and other dignitaries also addressed the program.

Organized with the objective of promoting Nepal as a promising investment destination, the Nepal Investment Summit 2019, has commenced. Minister for Finance and Convener Yubaraj Khatiwada announced the commencement of the summit with a welcome speech at 9:00 am.

Over 600 foreign delegates (265 from China, 120 from India) from 40 countries are participating the two day summit. As many as 77 viable projects worth $31.93 billion (50 public and 27 private projects) will be showcased in the event.

Nepal has introduced and amended number of policies, which have made the country a more favorable investment destination than in the past, a few aspects, including policy implementation and administrative facilitation but the country still lack competitiveness.

“It is commendable that the government has introduced a number of business-friendly policies, but the private sector will like to see proper implementation of all the policies and their provisions to foster business growth,” said Shekhar Golchha, senior vice-president of the Federation of Nepalese Chambers of Commerce and Industry talking to The Himalayan Times. 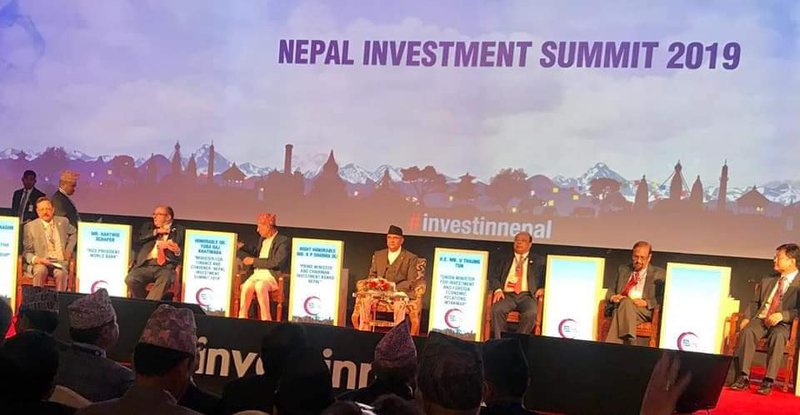 "In fact, the government has introduced a number of business-related laws targeting this summit, especially the Foreign Investment and Technology Transfer Act, Public Private Partnership and Investment Act and Special Economic Zone Act (First Amendment). Though the government has been criticized for introducing these policies in a hurry without enough homework and discussion with stakeholders, all these legislations are crucial for investment growth. Policies are dynamic documents and can be rectified," reports The Himalayan Times.

This is third summit of its type after the first in 1992 and second in 2017 organized to promote Nepal as a promising destination for investment.

Prohibitory Order Imposed In Rasuwa For A Week By Agencies 2 hours, 2 minutes ago

Nepal Has Suspended All International Flights By May 31 By NEW SPOTLIGHT ONLINE 13 hours, 17 minutes ago

DAOs Extend Prohibitory Order In Kathmandu Valley Till May 26 By Agencies 19 hours, 23 minutes ago