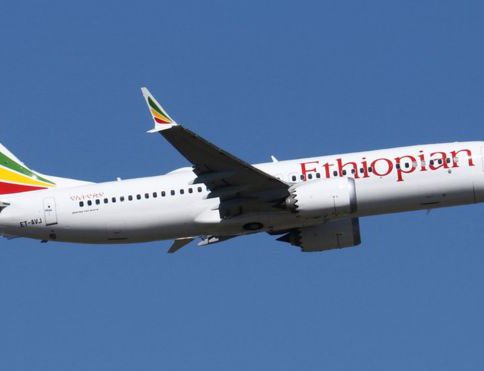 One of Ethiopian Airlines Flight ET302’s pilots told the other “pitch up, pitch-up” moments before the doomed Boeing 737 Max jetliner crashed three weeks ago, a new report revealed.

The conversation happened when the plane was just 450ft (137m) off the ground as the aircraft begun to point downwards, according to the paper.

The plane's radio reportedly died moments after the comment was captured. All 157 people on board were killed when the Boeing 737 Max crashed.

The plane’s anti-stalling system, which sees its direction automatically righted if a sensor picks up the aircraft is tilting up too far, has been blamed for the disaster.

The investigation is on-going and no official cause for the crash has been made public.

That instruction and other information about the plane’s final moments paint a picture of a flight crew that was quickly overwhelmed, The Wall Street Journal reported.

A faulty anti-stalling system on the Max is suspected in the disaster, which occurred shortly after takeoff.

All 157 people on board were killed.

The Manoeuvring Characteristics Augmentation System (MCAS) flight-control feature is also suspected in the crash of a Lion Air Boeing 737 Max in Indonesia last October, according to the BBC.

The Lion Air flight went down soon after takeoff, killing all 189 people on board.

The Wall Street Journal reported on Friday that investigators have determined that the flight-control system on an Ethiopian Airlines jet automatically activated before the aircraft plunged into the ground on March 10.

The preliminary conclusion was based on information from the aircraft's data and voice recorders and indicates a link between that accident and an earlier Lion Air crash in Indonesia, the newspaper said.

Boeing and the Federal Aviation Administration declined to comment on the report.

Boeing is facing mounting pressure to roll out a software update on its best-selling plane in time for airlines to use the jets during the peak summer travel season.

Company engineers and test pilots are working to fix anti-stall technology on the Boeing 737 Max that is suspected to have played a role in two deadly crashes in the last six months.

Boeing is also seeing its own expenses rise, although it would not disclose how much it is costing the company to make the software fix and also train pilots how to use it.

Cowen Research analysts say a "very rough guess" is that Boeing will pay about $2 billion after insurance to fix the plane, pay crash victims' families and compensate airlines that had to cancel flights.

Most Wall Street analysts are betting that the planes will be flying again in less than three months, while noting that it could take longer in countries that plan to conduct their own reviews of Boeing's upgrade instead of taking the word of the U.S. regulator, the Federal Aviation Administration.