Former director General of Department of Hydrology and Meteorology (DoHM) DR. RISHI RAM SHARMA is a well known meteorologist having a long experience working in the sector. After almost five years working as a Director General of DoHM, Dr. Sharma has been transferred to Water and Energy Commission secretariat recently. Following the deadly storm in Bara and Parsa, there is a growing debate over whether DoHM is capable enough to predict or preempt this kind of phenomenon in future, Dr. Sharma spoke to NEW SPOTLIGHT On various issues. Excerpts: 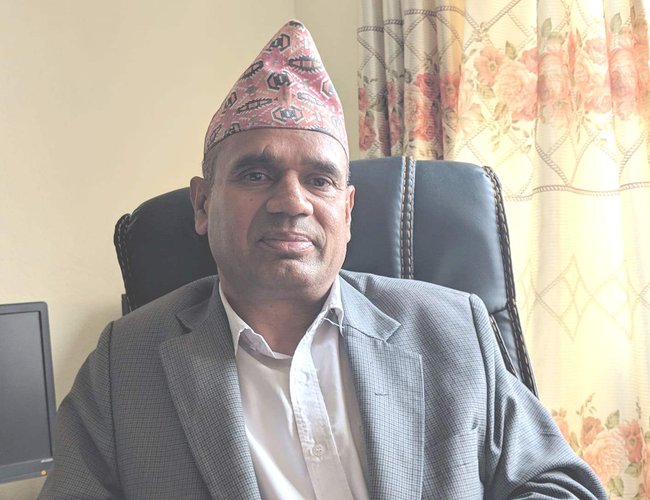 How do you see the recent deadly and destructive freak storm which completely devastated rural areas of Bara and Parsa districts causing heavy damage to every things inside and outside the house including blowing the roof?

One of the great lesson one has to learn from this tragedy is that wind storm can also destructive in Nepal. In the past our disaster policy focuses on flood, landslides, fire, earthquake and lightening. We have to add storm is also equally damaging and devastating.

Wind add storm has been killing people around world. Why Nepal did not list storm as killer?

For the first time, Nepal was hit by such a freak storm. We don' t have any past record of such a deadly localized storm. Nepal used to have small scale storm during this sessions causing just little damage particularly crops and some roofs or individual death. I have not heard of a storm which even blew a heavy truck parked at the road. It was just 30 minutes devastating rainstorm that battered Bara and Parsa for 30 minutes – from 7:45 pm to 8:15 pm. This is for the first time in forty years, DOHM has not measured this kind of strong wind storm. Preliminary indications shows that it was at 30 knots of wind speed blows at 15 meters per second or 55.56 kilometer per hour.

With so much investment and technological back up, why did Meteorological Forecasting Division fail to forecast such deadly storm?

Yes, forecasting division was unable to forecast the storm. Even DoHM through a public press statement accepted its inability to forecast the event. Metrological Forecasting Division has already made it clear through press release about the state. This is a very abnormal and extreme kinds of storm. My question is even if the division forecasted the storm, would it prevent the devastation?

What do you mean?

The division has been regularly forecasting the possible thunderstorm, gusty winds/lightning, rain etc covering national and regional level. As Nepal does not have weather rather forecasting system, it is not possible for Nepal to forecast the event like this of local level. There need to invest more money to install radar systems and increase the coverage and to improve human capacity. Similarly, there also need to have more fund for research and study on this kind of extreme events of past to forecast for future.

What is your preliminary study said about the storm?

The cold wind coming from Chitwan and the high speed hot cloud coming from Bay of Bengal and Arabian Sea converge with each other causing rain, hail storm and wind in local level confining to some areas of two districts. Once the low pressure build in atmosphere, the wind generally blow from east to west. The wind from Indian state of Madhya Pradesh also blowing towards east searching low pressure areas. All different elements collided in the area.

What are the lesion Nepal needs to learn?

Bara and Parsa have taught us a big lesson about the storm in Nepal. Our efforts should be now not to repeat the devastation again. For this, there need to work together different stake holders including central, provincial local levels, communities, Civil Society organizations to make resilience infrastructures and upgrading and strengthen the forecasting system to preempt damages from this kind of extreme events in future. In every mistake, we always learned a lesion not to repeat it again. We should not repeat such mistakes.

What is the state of weather radar system in Nepal?

One weather radar system has already already installed in Surkht to cover western region but it is yet to operationalise. Installed at the cost of almost Rs.300 million in Surkhet, it will cover entire western parts of Nepal from Mahendranagar west up to Kapilvasty and Dadeldhura to Arghakanchi or it will cover 300 kilometer periphery. The radar can use to forecast the cloud, floods, hailstorm and storms. It is unfortunate to say that we are unable to operate the equipment. So far as central and eastern Nepal is concerned, the radars are yet to install. Now the international tender bidding has already completed and infrastructures are under construction.

Do you think instruments and equipments are are enough to forecast such storm?

We also need research, capable manpower and team work. We have been forecasting 72 hours long forecasting of weather since long time. However, we are yet to develop institutions for short period forecasting and disseminating the information regarding formation and moment of cloud, hailstorm. Now the time has come for us to disseminate the short term forecasting through our existing data data system received from each ten minutes from satellite and sharing satellite information from satellite of neighboring countries. Although there are certain limitation, we do have data available even in now. What is required is a formation of team to analyze the date and disseminate it. If any local level events like the current one occurred in western Nepal, then we can question DHOM for its failure. This should be the work of DHOM.

What other lesion Nepal has learnt?

It also open our eyes that there need to revisit our current building structures and building code. After earthquake, Ministry of Urban Development has proposed earthquake resilient building codes and building design. We learned the earthquake resilient houses can be made using the local materials as well. Similarly, we also needs to propose a storm resilient buildings as recent storms destroyed existing homes build by mud. We have learned a lesion how to strengthen the existing buildings. Ministry of Urban Development has to take lead involving provincial and local government. Provincial and local levels has to set the building code resilient to storm in future. We need to build policy and implement them.

Why building code is important?

Even if we had forecasted the storm in time, what people would have done was to go and stay in home for safety. As all the people died inside house, here comes the question how safe the house. In Bara and Parsa, those who killed by storm were leaving inside the home at the time of storm. As the storm hit at the evening with rain and hailstorm, everyone was leaving inside home feeling safe. However, the storm destroyed the home which majority people felt safe. During the earthquake houses are unsafe but houses are regarded as a safe place to survive from storm and rain. But, people died here in a place where they believe safe.

How do you see early warning system in such wind?

Early warning system has prevented some losses. However, given the nature of storm which occurred in Parsa and Bara, nothing seems to be workable. Nepal has been facing several kinds of extreme events including concentrated rains, GLOFs, wind storms, floods and crashed of planes. What Nepal needs to do is to learn lesion. Given last fifty years of weather trends, we have been facing extreme weather events time and again. For instances, the flood of 2015 in central and eastern Terai was caused by concentrated rain in Chure areas. Similarly, many Glaciers are enlarging causing threat of GLOF.

What options for people to live in safe?

Given the rising temperature and extreme events like this, Nepal has a very little options. The options is to follow adaptation. Our life style, our infrastructures and livelihood should be made adoptive to changing climate. Of course, DoHM was unable to forecast the situation. For the forecasting of such event, there need to build infrastructures with modern equipment particularly weather radars. Parsa and Bara do not have any coverage of weather radar system. This is the reason we were unable to predict the moves. Even if there was radar forecasting, they would not have prevented the casualty and damage given the nature of disasters.

Who do you blame for loss of infrastructures and casualty?

The casualties in the recent caused by not falling trees, wire other but the destruction of houses. People died and injured because of weak infrastructures. All the human losses are due to weak infrastructures. We have not seen any concrete house damaged by the storm killing any one. Overwhelming houses are thatch houses with weak walls and roofs.

Can forest minimize the damage of this kind of wind?

Since the forest can control the speed by absorbing its power. In the past, there would have this kind of wind in forest areas which would have absorbed the strength and power. Given the present context of massive in deforestation and clearance of forest areas, houses has to resist all kinds of winds. In hill areas, mountains also contains the speed of the winds but there is nothing in the areas like South of Parsa, Bara, Rautahat and Sarlahi to contain the power of wind.