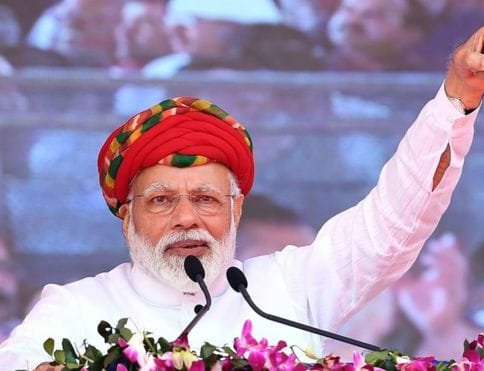 Prime Minister Narendra Modi on Tuesday continued his spate of attack on the Congress alleging that the principal Opposition party is speaking the language that Pakistan speaks. PM Modi said the Congress’s election manifesto has promises that suit Pakistan’s position on Jammu and Kashmir and terrorism.

“The Congress says Article 370 won’t be removed. The language of the Congress’s ‘Dhakosala Patra’ (a term used by PM Modi to describe election manifesto of the Opposition party) is the same as Pakistan’s. They have promised to hold talks with chaotic forces in Jammu and Kashmir. Pakistan wants the same thing to happen,” he said at an election rally in Maharashtra’s Latur.

The prime minister said the Congress is responsible for “Pakistan coming into existence”. He said the Congress’s poll manifesto talks about diluting the Armed Forces Special Powers Act (AFSPA) which is what Pakistan wants.

“The Congress has announced that those who abuse the nation, work for turning India into many pieces (tukde-tukde) by doing away with the law of sedition. Pakistan wants the same,” PM Modi said adding, “Can you trust such a Congress? Can you trust their allies?”

He also raised the issues of Balakot air strike and Pulwama terror attack “making an appeal to the first time voters” if they can dedicate their votes to the “heroes of IAF strike” and “martyrs”. A suicide bomber had targeted a CRPF convoy on February 14 in Jammu and Kashmir killing 40 soldiers.