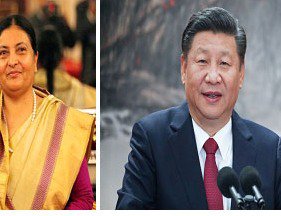 Bhandari will address the Belt and Road Forum on April 25. She is also expected to meet Xi and extend her a formal invitation to visit Nepal.

The Himalayan Times reports that the protocol, which will pave the way for the implementation of the TTA, is planned to be exchanged between Secretary at the Ministry of Industry, Commerce and Supply Kedar Bahadur Adhikari and a Chinese vice-minister on behalf of their respective governments in the presence of Bhandari and Xi.

According to THT, Nepal and China initialled the much-hyped protocol of the agreement, which was signed in March 2016 during Prime Minister KP Sharma Oli’s China visit, in Kathmandu on September 7.

"After a few revisions, both the governments have endorsed it for formal signing. Government sources said the Cabinet approved the protocol some two weeks ago and the Chinese government had also endorsed it," reports The Himalyan times quoting officials.

At the time of the protocol’s finalisation in September, the two countries had agreed to formally sign the protocol during a high-level visit from one of the two neighbouring countries.

After signing the TTA, Nepal will be allowed to use Shenzen, Lianyungang, Zhanjiang and Tianjin seaports, ending Nepal’s sole dependence on Indian ports for overseas trade.

Nepal has also been allowed to use Lanzhou, Lhasa and Xigatse land ports (dry ports). As per the protocol, Nepali traders will be allowed to use any mode of transport— rail or road — to access the seaports for third-country trade.

Madhesh Based Party Demand To Include Its Agenda In The Amendment By NEW SPOTLIGHT ONLINE 5 hours, 11 minutes ago

Japan To Celebrate May 26 As “Hirotaka Takeuchi 14 of 8000m Mountains Summit Day By NEW SPOTLIGHT ONLINE 1 day, 23 hours ago