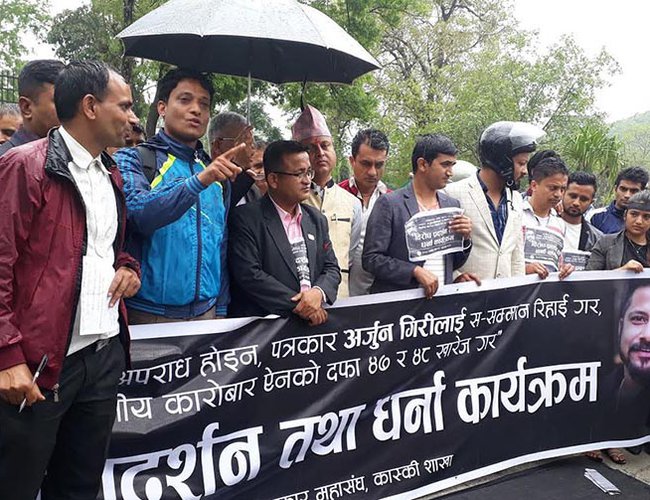 Federation of Nepali Journalists has withdrawn its decision to continue sit-in protest in front of the District Administration Office. However, it will continue to mount pressure on the government to cancel two sections of the Electronic Transactions Act, 2018.

According to FNJ, a meeting of its central committee held today decided to hold discussion with the concerned stakeholders, and lobby with the government for amendment to the draconian law, which curtails press freedom.

However, before reaching the decision, the journalists had staged a sit-in protest in front of the DAO, Kathmandu, demanding an end to the use of provisions stipulated in Sections 47 and 48 of the act, which it said were against press freedom.

FNJ President Govinda Acharya said a delegation of the journalists’ body submitted a memorandum to Minister of Communications and Information Technology Gokul Prasad Baskota demanding cancellation of the provisions of sections 47 and 48 of the act. In response, Minister Baskota promised that he would do the needful to address the demands and concerns of journalists.

Meanwhile, the Kathmandu District Court has ordered the release of Arjun Giri editor of Tandav news online and Tandav weekly magazine, on general date amid the protest of journalists.

According to Section 47 of the act, a person who publishes any materials in the electronic media that are prohibited from publication or display under the prevailing law or which may be contrary to public morality or which may spread hatred or jealously against someone or jeopardise the harmonious relations among people of various castes, tribes and communities, will be punished with a fine of up to Rs 100,000 or an imprisonment of five years, or both.

It adds that a person is liable to be punished with a fine of Rs 10,000 or an imprisonment for two years or both, if he or she violates an individual’s rights to privacy.

Central Investigation Bureau of Nepal Police had nabbed Giri after a cyber crime case was filed by Pokhara’s entrepreneur Bipnedraraj Batash. Earlier, the weekly had carried a news item alleging that Batash was involved in swindling. Police prevented journalists from staging the sit-in in front of the Office of the Chief Minister.

Discussion On Gurkhas By NEW SPOTLIGHT ONLINE 12 hours, 59 minutes ago

Nepal To Establish 500 BOP In Border With India And China By NEW SPOTLIGHT ONLINE 2 days, 18 hours ago