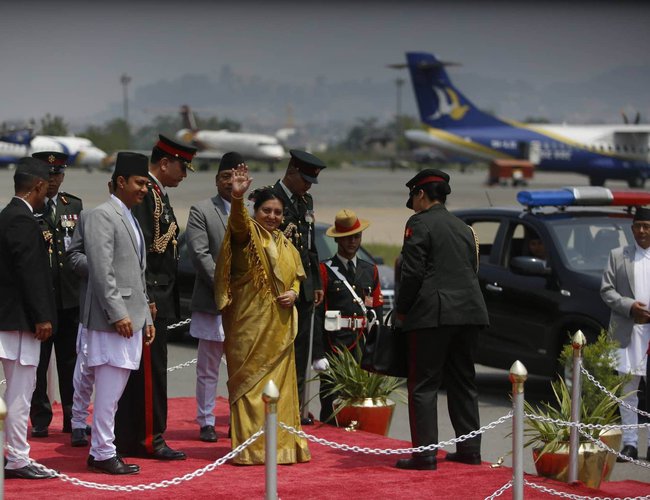 Upon arrival at the Xianyang International Airport of Xi'an, the President was received by the Vice-Governor of Shaanxi Province Hu Minglang, Ambassador of Nepal to China Leela Mani Paudyal, Ambassador of China to Nepal Hou Yanqi, and other senior officials of the People's Republic of China.

The President is accompanied by Pradeep Kumar Gyawali, Minister for Foreign Affairs, Dormani Paudel, Chief Minister of Province No. 3, Members of Parliament, high-ranking officials of the Government of Nepal, and a business delegation.

The Governor of Shaanxi Province,Liu Guozhong will call on the President tomorrow afternoon.

According to a press release issued by Embassy of Nepal in Beijing, the President will leave for Beijing in the evening tomorrow.

Nepal and China will likely to sign a number of bilateral agreements, including the Protocol of the Nepal-China Transit Transport Agreement and pacts on Trans-Himalayan Multi-Dimensional Connectivity Network under the Chinese-led Belt and Road Initiative during President Bidhya Devi Bhandari’s nine-day state visit to the northern neighbor beginning tomorrow.

Bhandari’s is a first ever state visit to the northern neighbour by a Nepali president. She will lead a Nepali delegation to the second Belt and Road Forum for International Cooperation which kicks off in Beijing on April 25.

According to The Himalayan Times, the major agreements to be signed during delegation-level bilateral meeting between Bhandari and Xi on April 29 include the protocol that will pave the way for the implementation of the TTA that was signed in March 2016 during Prime Minister KP Sharma Oli’s China visit.

The Protocol to the TTA has allowed Nepal to use Shenzen, Lianyungang, Zhanjiang and Tianjin seaports, ending Nepal’s sole dependence on Indian ports for overseas trade.

Similarly, the two sides will sign agreements on customs cooperation, on expediting Chinese-aided projects in Nepal, and on cultural property protection aimed at curbing illegal trade in artefacts, according to high-level sources at the Ministry of Foreign Affairs.

The Himalayan Times reports that Nepal and China will also sign an agreement on boosting cooperation between Nepal Bureau of Standard and Metrology and Standardisation Administration of China. This agreement is aimed at boosting trade between the two countries.

FAO’s Asia And the Pacific Nations To Hold Regional Conference In Virtual Mode In September By NEW SPOTLIGHT ONLINE 1 day, 18 hours ago