PM Modi At Roadshow In Varanasi

PM Modi At Roadshow In Varanasi 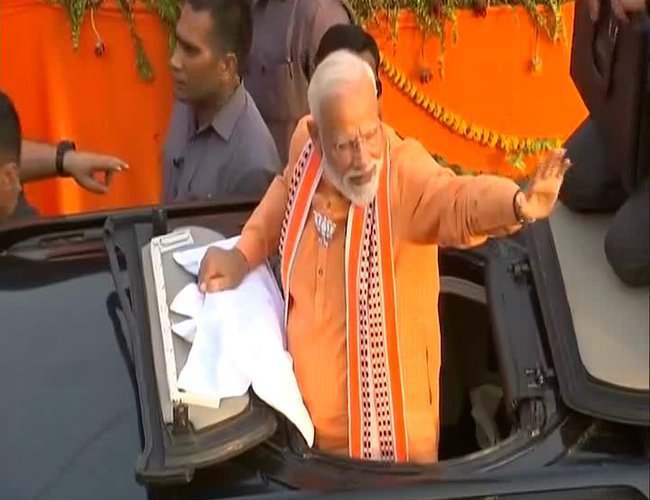 A large crowd, many in it wearing saffron caps and scarfs, gathered near the iconic Benaras Hindu University gate of Varanasi on Thursday evening for PM Modi's roadshow in the Uttar Pradesh temple town where he will file his election papers to contest the Lok Sabha polls.

After paying tribute at a statue of Madan Mohan Malviya, a leader of the independence movement and a renowned educationist, the PM took his roadshow through the holy city, passing through ancient temples and ghats before finally ending in the holiest ghat of them all, the Dashashwamedh. The prime minister will also attend the evening aarti at this ghat.

Here are the pointers of PM Modi's speech in Varanasi:

5 years ago when I stepped on the land of Kashi, I said that mother Ganga had called me. When mother Ganga called me, the brothers and sisters of Kashi gave me so much love that this fakir got adapted in the austerity of the city.

It is my privilege to join the Veda tradition with knowledge analysis and logical experiences.

This inspiration of truth, justice, non-violence, knowledge has also given me the strength to stand with these values at the global level

There were continuous terror attacks from 2005 to 2014 at our centres of faith like Sankat Mochan temple here and Akshardham temple in Gujarat. I still remember the cowardly murders of innocent devotees, it still gives me goosebumps. The Government of that time did nothing except holding talks (with Pakistan) after every attack

Kashi blessed me not to be the only MP. I was given the strength of confidence of 130 crore Indians. But our style is different. In similar circumstances, we told them that the new India does not just talk and tolerate, but we respond to terrorists in their own language

Whether it is the Pulwama attack, Uri attack or any other issue, I have only one mantra with which I have lived - the country comes first, India first

For a competent India, for a prosperous India, for a happy India, the country needs development as well as security.

We are moving towards a direction where there is science, spirituality, talent, tourism, and modernisation but without westernization

There are three aspects of the direction in which we are moving towards the development of Kashi. First spiritual, second practical and third humanitarian.

On 17 May 2014, I was taking a resolution on the Ganga coast, so I had the question of whether I would be able to fulfil the expectations of Kashi?

We have gone a long way in making mother Ganga clean. Many of the drains that have been found in Ganga have been closed. Modern plant to purify water has started working

We are doing everything with change which empowers the country. I pioneered the task of doing things that were too small to my opponents

There is cleanliness, toilets, cooking gas in the houses, the poor have a bank account, the poor have houses, there is accessible health service. Many of these things do not seem to be too big to think about, but if you think carefully these are the biggest tasks.

Self-confidence is the capital that can be found across the challenge. This is one way of getting out of the curse like poverty. New India's self-confidence will become developed India's confidence.

Earlier, it was only possible for the special people to reach the government, today, the common man is also communicating directly with the government.

Today, the common man believes that he has access to the minister, the government and the Prime Minister.

Bhutanese Monk Decided To Bar Visitors From Religious Dance Due To COVID-19 By NEW SPOTLIGHT ONLINE 11 hours, 55 minutes ago

Historic Peace Talks Between The Taliban And The Afghan Government Begins By Agencies 1 week, 3 days ago

With 27 More Test Covid-19 Positive, The Total Surge To 224 In Bhutan By NEW SPOTLIGHT ONLINE 3 weeks, 2 days ago