No Load Testing Of Upper Trishuli 3A Has Successfully Completed

No Load Testing Of Upper Trishuli 3A Has Successfully Completed 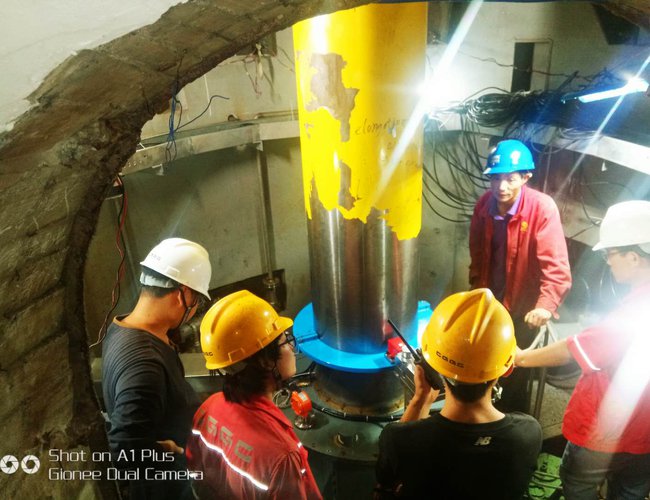 With completion of final no load testing of Upper Trishuli 3 A, Managing Director of Nepal Electricity Authority (NEA) Kul Man Ghising has reason to rejoice as one of the prolong sick project is in a position to generate the electricity.

From power house site to transmission line, Upper Trishuli Project faced several obstructions. Thanks to MD Ghising spirit of working together with all the staffs, finally Upper Trishuli 3 A came as a reality.

Along with several transmission line, Chameliya, Upper Trishuli 3 A and Kulekhani III, one of the worst project, all of them come to complete during the tenure of Ghsing.

The wet and no load testing of infrastructure of Upper Trishuli 3 A have successfully completed. This testing will be taken before generating the electricity from the project. According to Managing Director Kul Man Ghising, no load testing of all the equipment of powerhouse no completed.

Under this testing, the water discharged from tunnel send to pen-stock pipe to turbine of powerhouse.

Initially, NEA has set target to generate 30 MW electricity from fist unit on April 31. Due to some technical reasons, it has delayed for few days. MD Ghising has made it clear that the generation will start from next week.

Having faced several difficulties and constraints over the last decade, the project has finally completed. After the testing, the technician will now check whether any leakage in the tunnel and other equipments. After completion of this test, there will take another 5-6 day to fill the water in dam.

MD Ghsing said that the project will start final generation one of 30 MW union from 15 May. Second unit will start generation from end of June. After facing several hitches, the construction of 220 kV Kathmandu Matatirtha transmission line has already compelled.

With total investment of $ 120.58 million, the project has constructed concessional loan from Chinese Exim Bank, NEA and government’s investment.

Under Engineering, Procurement and Construction model, Chinese construction company CGC has completed civil, powerhouse, tunnel, electro-mechanical and hydro mechanical. The agreement was signed in 28 May 2010 to complete by 31 May 2014.

After several technical issue including the construction of powerhouse and augmentation, the time was extended up to 30 June 2016. . As the earthquake of 2015 badly damaged the projects dam and tunnel and access road, the time has extended for 30 April 2019.

KUL MAN GHISING Mission Transmission By A Correspondent 4 weeks ago