Watching Mount Everest from the First Flight To Space, Russian cosmonaut Viktor Petrovich Savinykh sees his visit to Nepal as the most significant 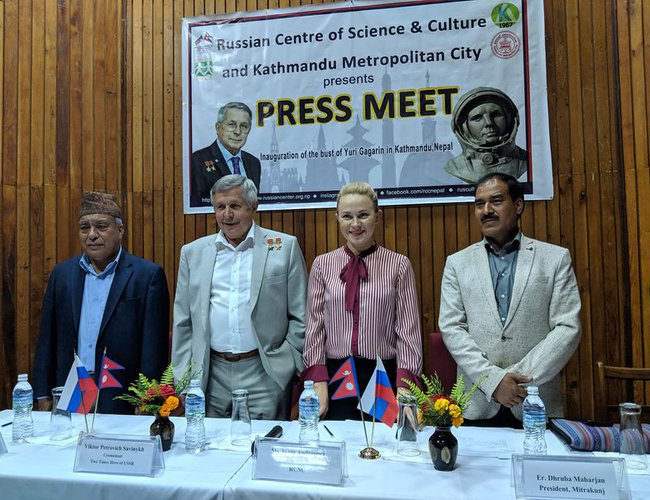 As the 85th Birth Anniversary of cosmonaut Yuri Gagarin, the first living being to journey into outer space, is celebrated, Nepal's first satellite has started to send signals to Nepal.

What a coincidence, Russian Federation, a pioneer of space technology, presented a bust of Yuri Gagarin to Kathmandu Metropolitan city recently. At a function, the bust was installed at Sankhedhar Park. This bust is a courtesy to strengthening the bilateral relations between Nepal and Russia, which has been defined by mutual respect and cooperation.

Mayor of Kathmandu Metropolitan City Bidya Sundar Shakya and Special Guest Cosmonaut Viktor Petrovich Savinykh, who has been twice awarded as Hero of the Soviet Union, installed the bust jointly.

He said that Russia is ready to provide necessary support to Nepal in space technology. “It will be a matter of pride for us to share our scientific knowledge with Nepal on cosmic technology,” said cosmonaut Viktor Petrovich Savinykh.

Visiting Nepal as a guest to attend inauguration of bust of Yuri Gagrin, first human to reach space, cosmonaut Viktor Petrovich Savinykh shared his thought at Russian Center for Science and Culture.

With a collaboration of RCSC and Kathmandu Metropolitan City, the bust of Yuri Gagrin was unveiled near Rani Pokhari.

Clearing the medical tests and getting selected for training to become a cosmonaut is the most difficult part, said Viktor Petrovich Savinykh, a Russian cosmonaut.

When Russia invited applications in 1960s to train and select cosmonauts, more than 500 persons turned up for the selection. Many were dropped during the fitness test and only 20 selected to undergo training.

Health and flying skills are the two important criteria to become a cosmonaut, he said.

In 1978 a six-member team was selected to undergo training. Savinykh was one of them. His first mission to space was in 1981. The second one was in 1985 and the final one, 1988. Among the three, the second was the toughest trip to the cosmos, he said.

During the first mission, Savinykh spent 75 days in space and in the second mission; his stay got extended due to the problems in the space shuttle. It took nearly 170 days during the second visit, he said.

Before the journey of human beings to space, Russia sent two canines and they successfully returned. Only after their successful return to the earth, Russia sent Yuri Gagarin and his team to the space.

Savinykh is visiting the country at the invitation of RCSC. A photography exhibition was also held on the occasion.

Dhruba Maharjan, president of mitrakunj and Nahendra Pradhan, immediate past president of Mitrakunj also spoke on the importance of the day.

Earth Day 2021: Significant And Importance By Agencies 3 hours, 56 minutes ago

MELAMCHI COMPLETION Japan’s Pleasure By A Correspondent 6 hours, 13 minutes ago

EU SUPPORT TO EARTHQUAKE RECOVERY Successful Completion By A Correspondent 1 day, 4 hours ago