As Nepal and France are celebrating the seventy years of establishment of diplomatic relations, they are showing common things that link the two countries 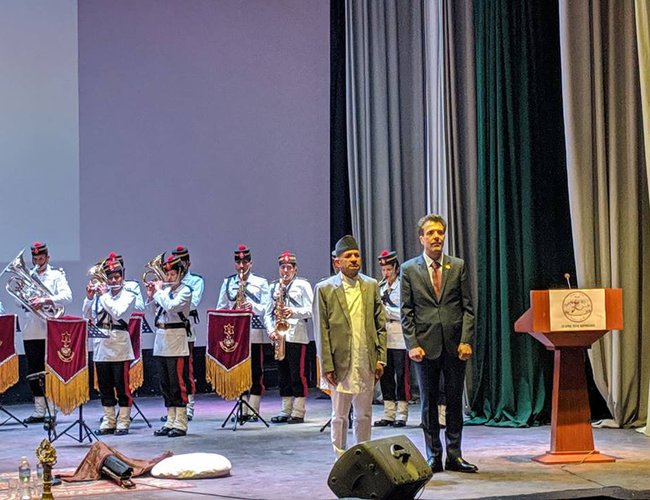 Although Nepal and France are far away in terms of geography, there are many things to link these two countries not only at the official levels but also at the people to people level.

Even before the establishment of formal diplomatic relations between the two countries, Nepalese officials had made efforts to connect with France. Bhimsen Thapa had sent a delegation to meet French in 1812 in India.

Nepal's most powerful man of the 18th century Jung Bahadur Rana not only paid his visit to France on the way to England but also influenced by the legal system. After his return from his visit, he introduced civil code in Nepal, which is influenced by French legal system.

At the people to people level, renowned French scholar Levy was the first continental European to write a book on Nepal. During the time, the level of relations between Nepal and France grows even at the people-to-people level.

To show the existence of people to people relations, the Ministry of Foreign Affairs and the French Embassy to Nepal hosted a cultural event provided by the group Singhini Consort.

The group, which celebrates 15 years together, seeks to discover the unknown facets of scholarly, indigenous, and popular traditions of the Himalayas. It is also a musical bridge between the Western and Eastern scholarly traditions.

Led by Franck Bernède, its artistic director, the group is made up of about fifteen musicians, singers and dancers. Along with the Nepalese artists, there are also musicians and dancers from other Himalayan regions, including India. Founded in 2001, the group has performed on numerous national and international stages.

“We all know, a single individual alone cannot whistle a symphony. A whole orchestra is needed to play it. For the growth and development of Nepal-France relationship as well, all stakeholders including political leaders, diplomats, civil servants, business communities, civil societies, students, media persons and most importantly the common people have their part to play. Let us work collectively towards enhancing the bonds of this long and historic friendship,” said minister Pradeep Gyawali.

Jointly organized by the French Embassy and the Ministry of Foreign Affairs on the occasion of the 70th anniversary of the establishment of bilateral relations between Nepal and France, large numbers of people including high government official, Kathmandu based head of foreign diplomatic missions, former ambassadors, business communities, French nationals living in Nepal and people from different walks of life attended the program.

French ambassador to Nepal Francois-Xavier Leger highlighted the importance of France and Nepal relations and historical evolutions highlighting the French nationals, mountaineers, scholars and architects for their contributions.

The Goodwill Ambassador for the 70th anniversary Shrinkhala Khatiwada, Ms. Nepal, also shared her thought on the importance of the relations and her recent visit to France and interest of French people towards Nepal.

Frank, who has been living in Nepal for the last three decades, is a well-known cellist and enthno-musicologist of the region. Franck is the founder and director of the Sighini Research Center, an organization dedicated to the preservation and promotion of Himalayan music and dance. He, along with his two team members Santosh Bhakta Shrestha and Bidur Rajkarnika, played several musical programs.

The musical path of Franck Bernède, cellist and ethnomusicologist, is crossed and influenced by various currents/trends. Born into a family of musicians, he began his education under the direction of his father, the violinist and conductor Jean-Claude Bernède. He then studied with Alain Meunier and Reine Flachot at the National Conservatory of Music of Lyon as well as with Arto Noras at the Sibelius Academy in Helsinki (Finland) where he was awarded his higher diploma. He completed his studies in the baroque music classes of Christophe Coin and William Christie at the National Conservatory of Music of Paris, where he obtained in 1985 a first prize in baroque cello. Since then, Franck Bernède has appeared in many European countries as well as in the United States, Japan, India, Nepal, Sri Lanka, Indonesia and Taiwan. He has participated in many concerts and recordings in ensembles specializing in Baroque selection such as The Concert of Nations (Jordi Savall).

Frank is actively involved in the field of ethnomusicology which he has been researching in India and Nepal for thirty years focusing on the bardic traditions of the Central Himalayas as well as on the music of the Newars of Kathmandu. Franck is the founder and director of the Singhini Research Center, an organization dedicated to the preservation and promotion of Himalayan music and dance.

Santosh Bhakta Shrestha and Bidur Rajkarnikar joined in a performance with Franck with Tabla and musical instrument Esraj. Santosh Bhakta Shrestha, born in 1975, began studying the musical instrument esraj at the age of 11 under the guidance of teachers Mohan Prasad Joshi and Krishna Narayan Shrestha. A member of the Singhini group since 2003, Santosh has performed both in Nepal and abroad.

Bidur Rajkarnikar began his musical studies under the direction of his father with whom he learnt the art of tablas and Newari percussion. He has been a member of the Singhini group since 2001.

Frank in a solo performance as well as in a musical collaboration with Santosh and Bidur have played various music showing how strong the people to people relations through music.