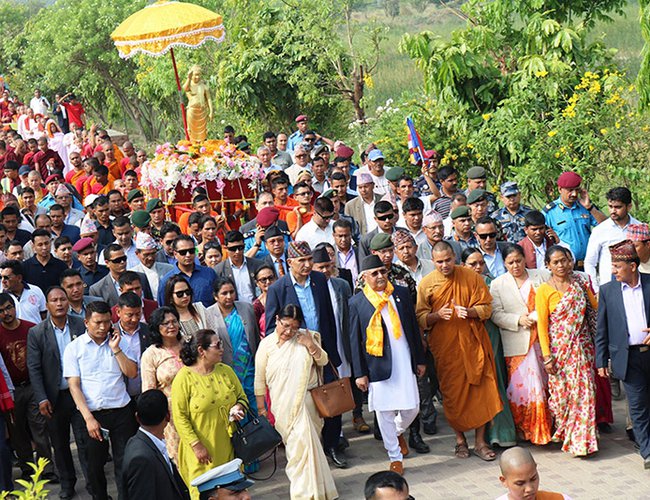 Prime Minister KP Sharma Oli and his spouse Radhika Shakya attended a program organized by the government of Province 5 on the occasion of 2,563rd Buddha Jayanti and the beginning of Visit Lumbini Year 2076 BS, in Lumbini, on Saturday.

Buddha Jayanti, the day of the birth of Lord Buddha, is being celebrated across the country today.

Also known as Buddha Purnima, the day falls on Baishakh Shukla Purnima as per the lunar calendar, which is a full moon day.

Those celebrating visit Buddhist monastries and shrines to worship Lord Buddha, who is believed to be the messenger of peace, based on whose teachings Buddhism was founded.

Gautam Buddha, also known as Siddhartha Gautam, was born a prince to King Suddhodana of the Shakya dynasty of Tilaurakot — which is located in Kapilvastu, Nepal — and Queen Maya Devi.

The queen is known to have given birth to Buddha in Lumbini, while on the way to her maternal home in Devdaha, which falls in Rupandehi district of Nepal.

Government of Province 5, where Lumbini is situated, is organising an array of programmes today to mark the 2,563rd Buddha Jayanti, also the beginning of Visit Lumbini Year 2076 BS.

Prime Minister KP Sharma Oli reached Lumbini yesterday evening to participate in the events planned for the day, while President Bidya Devi Bhandari is scheduled to reach there today to attend various programmes.

Moreover, President Bhandari as the chief guest is scheduled to officially inaugurate the Visit Lumbini Year 2076 BS to be announced by Province 5 government, according to Lumbini Development Trust.

Buddha is believed to have received enlightenment in Bodha Gaya in the Indian state of Bihar, following which he started sharing his knowledge with his disciples.