Attempts by today's top rich communist leaders to shield themselves with explanations and statements have ranged from comical to dishonest and bizarrely cut off from reality. Prime Minister Oli and his cabinet spokesperson trying to justify how their party's top secretary acquired official Baluwatar land had property developers rolling with laughter 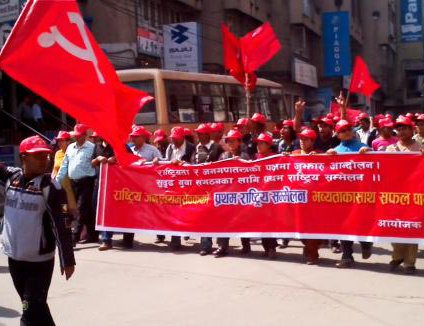 The Left-leaning daily Naya Patrika recently initiated a debate around the problems facing Nepal's broadly Left but mostly communist parties, a burning issue that was also picked up by other broadsheets. Views ranged across the political spectrum, from True Believers to hardened Sceptics; but there was a strange agreement on the nature of the problem even if proposed solutions differed widely.

The debate itself was ignited by the failure of Loktantra to live up to its tall promises, and how events of the last decade – from compromises against nationalism with Mughlani spooks to pecuniary benefits from dilettantish Leftist West – have exposed its fatal flaws. We have a communist government that commands an enviable two-thirds majority in parliament and rules the roost of the local governments in six of the seven provinces but has spent a whole year and more doing almost nothing. Worse, it is mired in scandal after scandal which get exposed but the hullaballoo dies down when incriminating fingers start pointing to the top leaders of Loktantra, their relatives or party faithful and funders.

The list not only gets longer by the day but dwarfs scandals that happened in earlier regimes: Nirmal rape and murder, aircraft wide-body scandal, private telecom tax evasion, holy wine, loot and privatization of public land, promotion of corrupt but party-faithful judges, theft of public funds… not a day goes by without another scandal raising its ugly head. And the opposition Kangress isnot only unable to cash in on public anger with such sleazebut has itself been caught with its pants down and hands deep in the till. These shenanigans prompted a Nepali song "Loot, Kanchha, Loot!" that was widely popular and accurately reflected the public mood.

Attempts by today's top rich communist leaders to shield themselves with explanations and statements have ranged from comical to dishonest and bizarrely cut off from reality. Prime Minister Oli and his cabinet spokesperson trying to justify how their party's top secretary acquired official Baluwatar land had property developers rolling with laughter. Co-PM Prachanda, speaking before his increasingly frustrated cadres, said that his life is currently in danger and threatened to go back to the jungle ostensibly to re-ignite the compromised revolution. He, but not his cadres or his critics, forgot that the jungle is occupied by the Biplavite comrades he and Baburam betrayed (and from whom he has far more to fear than the Nepal Army or for that matter US Imperialism where he could safely take his ailing wifefor treatment). Liberal analyst Jugal Bhurtel tauntingly tweeted that, yes, Prachanda might like to go back to the concrete jungle of Delhi's Noida from where he directed the murderous movement that took 17 thousand Nepali lives, maiming and destroying the lives of many thousands more.

Socialist-leaning but non-communists have accurate diagnosis of the problems faced by the Left and argue for re-thinking socialism itself in the current national and global context, and in that re-thinking they discuss where the communists have gone wrong. Uddhav Pyakurel argues that there is really nothing communist about those who today call themselves so, and Krishna Khanal describes how leaders of parties calling themselves communist would make capitalists green with envy when they see the personal wealth they have accumulated. Many pointedly discuss how Nepali communists have given up on class and become communalists advocating caste and ethnicity-based politics. Pradeep Giri is not surprised by this degeneration as his own Kangress party's leadership is completely in confusion about socialism and the ideological stance his party swears by. He spoke in parliament about how Kangress betrayed socialism in the early 1990s by opting for unbridled privatization, and it is no surprise the communists only followed that same path to market bliss. As the Nepali saying goes: "Jetha mama ko ta bhangra ko dhoti, kanchha mama ko jhankegati?" (translated: if the older maternal uncle has rags for clothes, what can one expect from the younger one?)

Leftist thinkers and leaders who have not joined the Cash Communist bandwagon identify a range of sicknesses within the communist movement; however, they have no "revolutionary" cure to suggest, only reformism and ideological cleansing. Ghanshyam Bhusal, desperately trying to keep the Marxist flame flickering in this Bicentennial year, openly admits that communist party is no longer run on principles but is run by corrupt middlemen and brokers. Ramchandra Jha avers: communists failed to be an avant-garde Leninist party of the proletariat class and has instead kowtowed to casteists and ethnicists. Shyam Shrestha, editor of the erstwhile popular Mulyankan that was likened to Bombay's EPW, is amazed that communists are strong enough to hold a two-thirds majority in parliament but have lost all Left ideals and are completely beholden to middle-men traders. He predicts that without major ideological correction, the communist party will be destroyed in the next elections.

More die-hard True Believers who perform the role of Young Turks within the movement have more interesting diagnosis that calls into question some of the more fundamental tenets of communist beliefs. Hari Roka describes how trade unions have stopped looking after the broader interests of workers and average Nepalis but have become handmaidens of merchants as well as vehicles of enrichment and upward mobility of street-smart individuals. He thinks completely new and ideologically pure trade unions have to be created anew. Lekhnath Neupane sees corruption and kowtowing to comprador bourgeois as natural with a Maoist leadership that spent ten years abusing the UML for being renegade but shamelessly merged with them without any remorse.

Saroj Dhital argues that corruption among communist parties has boomed due to the throwing out the bathwater of religion together with the babies of compassion, morality and accountability. Dalits with communist leanings are feeling completely let down and now realize that their problem was never a class but a deep-seated cultural one that Bahun-led communist parties will never solve. Gopal Kirati claims that communist materialism has lost to the spiritual idealism of Nepali history and religion, leading to a situation where there is no communist leader with moral height that comes with personal sacrifice and which is needed to command a proletariat movement. Ahuti wonders how dialectical materialism is to be saved with a leadership that has lost the ideology of class; he even thinks that the Marxist approach to dominating nature must be re-thought in light of the environmental woes the world is facing.

All these statements of angst are being expressed against a background where the ideological torch has been wrested away from the mainstream two-thirds majority "Cash" communists by the practically underground Biplavite "Gas" Maoists and to some extent the over-ground Vaidya "Dash" Maoists. In this context, ideologically justifying a communist approach within a putrefying Loktantra is difficult; but Chaitanya Mishra, Nepal's leading neo-Marxist scholar does make a heroic attempt to do so. He first praises Biplavites for rightly diagnosing the current regional and global scenario of hegemonic and dynamic capitalism: how the rule of law and welfarism that are enshrined in the legal codes of most countries defy Marx's picture; how today's workers are no longer the proletariat of Marx's time; and how advances in information and military technology have made a Leninist style putsch to capture state power near impossible.

Mishra then goes on, again correctly, to damn them for not internalizing these diagnosticsand reframing their ideology but going back to the same old Leninist path of building up a war chest with coercive accumulation and alternative military apparatus. The old Prachanda path only succeeded because of his and Baburam's surrender to Mughlani spooks; it is doubtful if a Modified Mughlan with strong anti-communism in its genes will allow that tragic history to be repeated without becoming a farce. This is especially true in the current context of global financial capital and its total domination over industrial capital, to say nothing of its impact on Nepal's crony capitalism. Despite all these sane reflections, Mishra's advice to them, ironically, is to come back to current constitutionalism: how a party that decries the current political framework as a "butcher's shop displaying goat's head but selling dog's meat" to come under a contradictory and corrupt constitutionalism that has unleashed the police on them is difficult to envisage without the Biplavites committing ideological and moral suicide.

I too have added my two cents to this debate: https://www.nayapatrikadaily.com/news-details/12002/2019-04-22. My main contention is that, following science philosopher Karl Popper's arguments, Marxist contention that Marxism is "scientific" does not hold water: its main hypotheses have long been falsified by history. Moreover, Nepal's poverty and inequalities cannot be properly described by Marxist categories; and communist leaders who tried to do so themselves came from petty bourgeois or landlord backgrounds making the current tragic ideological corruption disappointing but probably inevitable. Nepal is destined to continue this debate long into the future, waiting for new political leaders with much more realistic political philosophies.

Three Decades Of Engagement In Climate Negotiations By Batu Uprety 15 hours, 37 minutes ago