The Bharatiya Janata Party (BJP) is likely to return to power as the party took leads in over 270 seats, early trends suggest 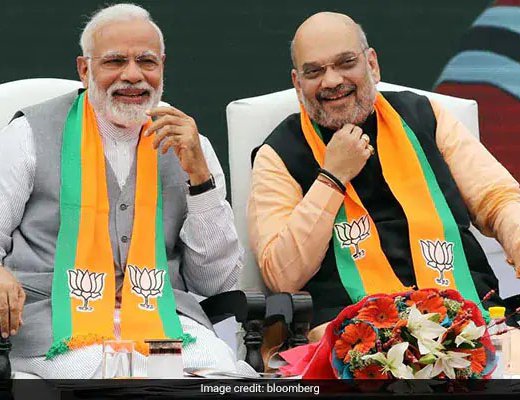 The Bharatiya Janata Party (BJP) is likely to return to power as the party took leads in over 270 seats, early trends suggest. Counting is underway. Results 2019 will not be delayed because of VVPAT verification as paper trail slips will be counted at the very end, sources have told NDTV.

The exit polls have predicted that the BJP's seat tally may see an increase when the results 2019 are announced. Party workers have already prepared for the celebration. One of the most important seats for the BJP would be Varanasi from where Prime Minister Narendra Modi has contested the Lok Sabha polls.

The poll of polls indicates that the BJP may lose some seats in Uttar Pradesh but would gain seats in West Bengal and Odisha. The poll gave the party 26 out of 42 seats in West Bengal. Odisha Chief Minister Naveen Patnaik's Biju Janata Dal (BJD) will be neck and neck with the BJP, the poll of polls says. In Uttar Pradesh, the party may get 49 seats, much less than its tally of 71 in 2014, the exit polls say. The big question is, can the BJP pull yet another sweeping Lok Sabha polls victory?

Prime Minister Narendra Modi's BJP has crossed the halfway mark on its own steam and leads showed a NDA sweep in the national elections within two hours of counting of votes.

The BJP is doing well in most states, including the three heartland states of Rajasthan, Madhya Pradesh and Chhattisgarh, wrested by the Congress in December.

It is also ahead in Karnataka - a state the Congress rules jointly with HD Kumaraswamy. The Congress is ahead in Punjab and Tamil Nadu, where it joined hands with the DMK. Elections were held on 542 of the 543 Lok Sabha seats and a party or alliance needs 272 seats to form government.

Bangladesh To Administer COVID-19 Vaccine For All, Free Of Cost By Agencies 3 weeks, 3 days ago

Bangladesh To Give Duty Free Access To 16 More Bhutanese Products By Agencies 1 month, 3 weeks ago