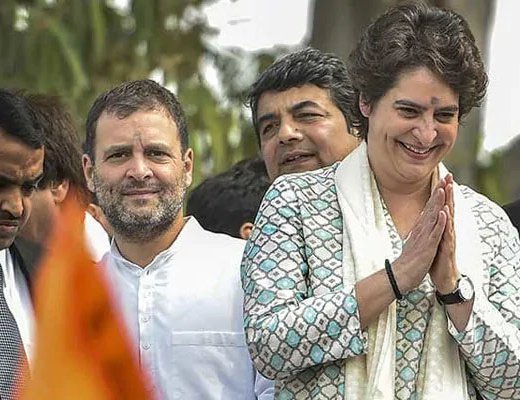 The early leads have come in which show Congress leading in just 64 seats. With its allies, the party is leading in 104 seats, trailing the ruling BJP's 322 seats. The Congress is ahead in Punjab and Tamil Nadu, where it joined hands with the DMK. Party chief Rahul Gandhi is leading in Kerala's Wayanad, however in Congress bastion Amethi, Mr Gandhi was trailing for a while. He is now back in the lead.

The Indian National Congress in the 2014 general election won just 44 seats in the Lok Sabha as the BJP became the first party in decades to get a full majority. This year, the ruling BJP is confident of yet another win as exit polls point to a thumping victory for the party. The Congress is not disheartened even though the exit polls predicted just 122 seats for the party and its allies. Party chief Rahul Gandhi had called the exit polls "fake" and urged his partymen to be alert ahead of the results. Election Results will be out by late evening.

Priyanka Gandhi too in a similar message to party workers said that they should not fall for "rumours" intended to make them drop their guard ahead of the counting of votes.

Congress joined hands with a number of opposition parties as they look to improve its count this time.

Rahul Gandhi is contesting elections from two seats this time, one from his home turf Amethi and from Kerala's Wayanad.

The results today will determine if the party can prove the exit polls to be wrong to form the government at the Centre ousting the largest political party in the world.

Counting of votes is underway and the Election Commission has said the final results will be in only by late evening.