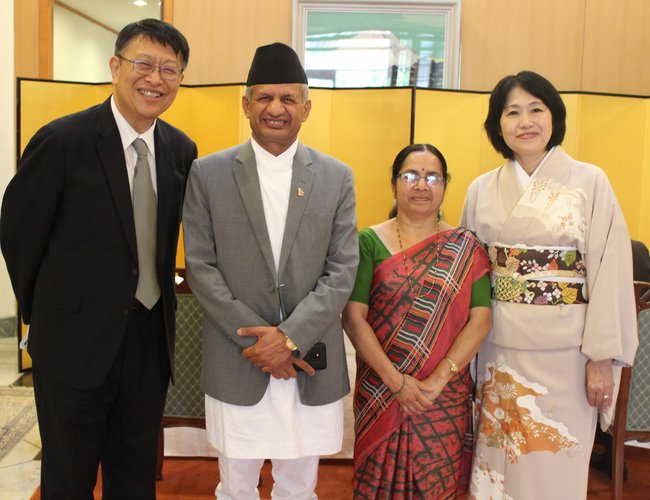 Masamichi Saigo, Ambassador of Japan to Nepal, hosted a reception to celebrate the Accession to the Throne of His Majesty, Emperor Naruhito at his official residence, in Tahachal, on Tuesday 28th May, 2019.

Ambassador Saigo mentioned the relationship between His Majesty the Emperor and Nepal. His Majesty the Emperor visited Nepal in 1987 when he was the Crown Prince, and spent time here visiting city areas and mountains. It is said that His Majesty developed further thoughts about the water problems of the world through this visit, and since then continues to talk on themes related to water and society at various international platforms.

The Ambassador referred to the bilateral relations between Japan and Nepal which continue to be strengthened as both of our Foreign Ministers visited each other’s country recently. He said that Japan would like to keep supporting the vision of Nepal, “Prosperous Nepal, Happy Nepali”, through various fields and will continue to deepen and widen our bilateral relationship further in a comprehensive and dynamic manner.

Since His Majesty’s accession in May this year, a new era, “Reiwa”, commenced in Japan. “Reiwa” means “beautiful harmony”, with the hope that culture will flourish through the hearts and minds of the people coming together in a beautiful manner.