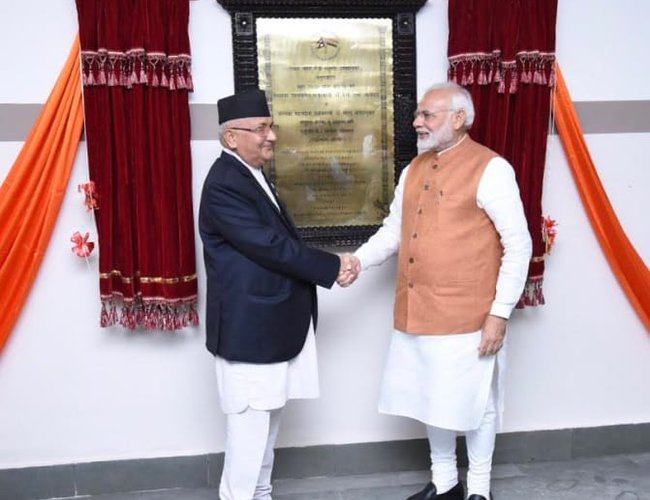 Prime Minister Oli is currently chairman of SAARC and BIMSTEC. However, he has invited as member of BIMSTEC. India has invited the leaders of Nepal Bangladesh, Myanmar, Sri Lanka, Thailand, Nepal and Bhutan to Prime Minister Narendra Modi’s inauguration on 30 May, signalling the primacy of neighbourhood and economic diplomacy, as well as connectivity, in Modi’s second term in office.

According to Indian media, speculation has been mounting over which foreign leaders will attend Modi’s inauguration on Thursday. The last time around, in 2014, Modi had invited the leaders of the South Asian Association for Regional Cooperation (Saarc)—Afghanistan, Bangladesh, Bhutan, Nepal, Pakistan and Sri Lanka—besides the prime minister of Mauritius.

On Monday, the government confirmed it has sent invites to the leaders of the countries grouped together as the Bay of Bengal Initiative for Multi-Sectoral Technical and Economic Cooperation, or Bimstec. “This is in line with the government’s focus on its ‘Neighbourhood First’ policy. The President of the Kyrgyz Republic (Sooronbay Jeenbekov), who is the current chair of the (regional) Shanghai Cooperation Organization (SCO), and the Prime Minister of Mauritius (Pravind Jugnauth)...have also been invited," Raveesh Kumar, foreign ministry spokesman said. The Indian-origin Jugnauth was present at Modi’s inauguration in 2014 as well.

“The invitation to Bimstec leaders shows that India clearly believes that its interests are better served by this grouping than by Saarc," said former foreign secretary Kanwal Sibal. “It implicitly conveys that there will be no move to engage Pakistan despite overtures by prime minister Imran Khan." Sibal was referring to a congratulatory Twitter message by Pakistan Prime Minister Imran Khan on Thursday and a phone call to Modi on Sunday.

Sibal said the invitation signalled that India was unlikely to show interest in reviving Saarc. A summit of Saarc leaders was to be hosted in Pakistan in 2016, but with India, Bangladesh, Afghanistan and Bhutan pulling out, Pakistan was forced to cancel the summit. India will also engage with countries in Saarc other than Pakistan who are not part of Bimstec, like the Maldives and Afghanistan, Sibal said, pointing to Modi’s likely trip to the Maldives on 7-8 June, his first overseas visit in his second term.

Madhesh Based Party Demand To Include Its Agenda In The Amendment By NEW SPOTLIGHT ONLINE 12 hours, 50 minutes ago

Japan To Celebrate May 26 As “Hirotaka Takeuchi 14 of 8000m Mountains Summit Day By NEW SPOTLIGHT ONLINE 2 days, 7 hours ago