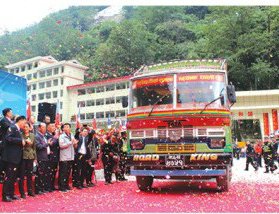 Minister of Industries, Commerce and Supplies Matrika Yadav and Chinese envoy to Nepal Hou Yanqi had jointly inaugurated the Tatopani Transit point and announced its operation.

The transit point officially resumed after four containers ferrying wool entered the Nepali side from China amidst a program attended by high level officials from both countries.

After the devastating earthquake of 20`15,Tatopani transit point at the Nepal-China shut down.

Despite the resumption of transit point, people will not be permitted to pass via the border. Vehicles ferrying goods from China will be off-loaded at a dry port in Larcha on the Nepali side and loaded from there.

The Nepal-China border point resumed after Miteri bridge and other physical structures damaged by the earthquakes were constructed. The border-point is the shortest from the capital Kathmandu.

China had constructed the road from border point to Baseri on the Nepali side while the Road Division Office, Charikot, had built the road from Barhabise to Beri. Houses and other structures destroyed by the tremors have been reconstructed and rebuilt at Tatopani, Liping and other areas.

US , German And Chinese Ambassadors Wish On Dashain By NEW SPOTLIGHT ONLINE 7 hours, 41 minutes ago