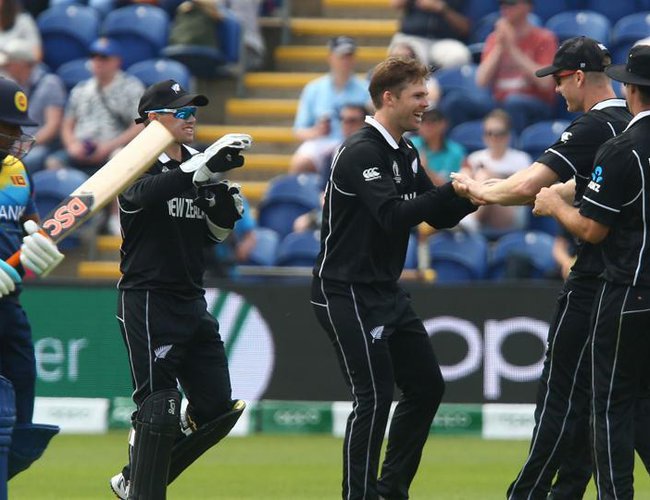 After being put in to bat, Sri Lanka collapsed to 136 all out in 29.2 overs, with New Zealand fast bowlers Matt Henry and Lockie Ferguson taking three wickets each.

Only captain and opener Dimuth Karunaratne resisted, carrying his bat for 52 not out.

Black Caps openers Martin Guptill (73 not out) and Colin Munro (58 not out) raced to their target in just 16.1 overs in aggressive yet composed fashion.

Kane Williamson's side also impressed in the field in a convincing victory to begin their bid to go one better than losing to Australia in the 2015 final.

The manner of their defeat reinforces expectations that a limited Sri Lanka side will struggle in this tournament and they now face a tough match against Afghanistan on Tuesday.

Sri Lanka faced an arduous task in the morning on a green pitch but, while the Black Caps seamers bowled with impressive pace and accuracy, the surface did not offer as much swing and seam movement as expected.

Instead, Sri Lanka were indecisive, clearly lacking confidence after a poor run in one-day cricket, with many batsmen failing to move their feet and prodding loosely at testing deliveries as they lost five wickets for just 14 runs at one stage.

Henry took two wickets in as many balls, ending Kusal Perera's counter-attacking 29 off 24 balls by inducing a miscued swipe to mid-on and getting a flat-footed Kusal Mendis nicking to second slip for a golden duck next up.

Needing to consolidate, Angelo Mathews fell for a nine-ball duck, caught behind as Colin de Grandhomme nipped it off the seam, before Jeevan Mendis sliced to gully off Ferguson, who also dismissed Dhananjaya de Silva lbw.

Only Karunaratne showed the patience and resistance required, carefully compiling a fine half-century by predominantly tapping straight balls off his pads, although he was fortunate not to be bowled when an inside edge hit the stumps but did not dislodge the bails.

Thisara Perera smacked two sixes before he was caught for 27 but Karunaratne soon ran out of partners, becoming only the second opener since West Indies' Ridley Jacobs in 1999 to carry his bat in a World Cup.