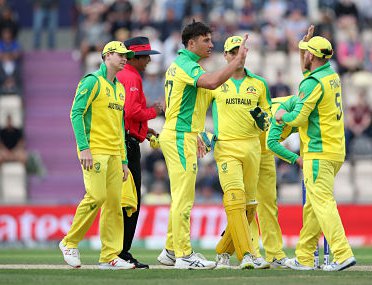 Australia captain Aaron Finch struck a superb 153 and Mitchell Starc took four wickets to lead the defending champions to an emphatic 87-run victory over Sri Lanka in the Cricket World Cup on Saturday.

Dimuth Karunaratne stood upright and scythed a pull over midwicket for four. Sri Lanka’s captain had his half-century; virtually the whole of The Oval, boisterous and waving their Sri Lankan flags with pride, were on their feet. The 12th over was not yet out, and already Sri Lanka were 98-0. Something was afoot in south London.

The ebullience of Sri Lanka’s supporters was the cue for Australia to mislay their equanimity. Aaron Finch missed a run-out chance, conceding four overthrows. There was a misjudged review, which - oh so inevitably - rendered Finch unable to review when Karunaratne was incorrectly adjudged not out for an lbw call only three overs later. Two years after chasing down an improbable 322 here against India in the Champions Trophy two years ago, now, needing an even more onerous 335, Sri Lanka sensed an opportunity to set their new record chase.

Alas, while World Cups are made for history-making, they are also made for heart-breaking. And, for the third time this tournament, Mitchell Starc’s late swing helped to turn a match in which Australia’s prospects of defending their target were imperilled.

First, he elicited Kusal Perera to play across the line, clattering a full delivery into his middle stump to break Sri Lanka’s opening stand. Then, with Australia’s other pace bowlers having already put them ascendant, Starc returned to extinguish Sri Lanka’s hopes in six balls. The drill with Starc at the death is familiar: full and straight, reverse swinging the ball late at great pace. It secured him the player of the tournament award, and the joint most wickets, in the 2015 World Cup; now, Starc leads the wicket tally once again, with 13 wickets at 19.15 apiece.

Finch's brutal 153 had given a buffer to withstand Sri Lanka’s early assault. He had begun circumspectly - in keeping with a team whose style is best characterised as safety-first, with David Warner labouring to 26 from 48 balls and Australia scoring 36 fewer in their opening 15 overs than Sri Lanka.

Consecutive sixes off Dhananjaya de Silva in the 29th over, both harrumphed over long on, signalled the carnage that was to ensue. If the look of rugged simplicity to Finch’s game makes him easy to underestimate, he is one of the shrewdest opening batsmen around, adaptable and adroit at recognising when the moment is there to be seized.

This was his third century in 10 innings: a remarkable turnaround amid suggestions that the returns of Steve Smith and David Warner could usurp him from the team. Instead, Finch’s form, and authority as captain, is better than ever.

“I started to doubt my game a lot,” Finch recalled of the last Australian summer. “There was a lot of time I was questioning everything that I was doing - whether it was technical, physical or mental.”

In a game-defining stand of 173 at eight runs an over, Smith unobtrusively continued his phenomenal World Cup record in making his eighth 50+ score in his last 10 World Cup innings. This 73 was his most fluent innings of the tournament; for the first time, Smith scored at over a run a ball. An astounding flick for six over long on from Lasith Malinga, marked by Smith’s trademark wrist flourish, suggested an elite batsman back at his best.

Even as Glenn Maxwell’s pyrotechnics had Australia eyeing up 350, Australia betrayed glimpses of the muddled thinking that characterised their dreadful ODI form between the 2015 World Cup and the start of this year. With the score 278-4 in the 44th over, Shaun Marsh arrived at the crease and plodded his way to an excruciating nine-ball three, looking as much use as a vacuum cleaner during a power cut. Marsh is a fine ODI player but this was an example of outdated, inflexible thinking when Australia had Alex Carey left to come.

Yet those grimly accustomed to Australia’s dominance at World Cups may view it as ominous that a team who remain manifestly short of their best are now top of the table, and waltzing to the final four. And, as Sri Lanka’s lower order subsided, losing their last seven wickets for 42, it suddenly seemed completely incongruous that this was a game that Sri Lanka had once been on course to win.