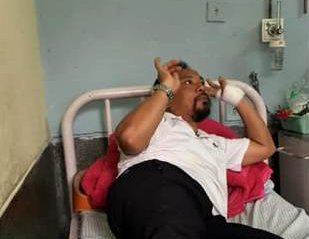 The PM’s directive came after political leaders and commoners expressed outrage on social networking sites at the inhuman treatment meted out to Chaudhary, who was admitted to Bir Hospital on Thursday evening.

Chaudhary remains in jail as he was recently convicted by Kailali District Court in the Tikapur carnage case. He has challenged his conviction in the High Court.

Samajwadi Party-Nepal leader and former prime minister Baburam Bhattarai met Chaudhary yesterday and condemned the treatment meted out to him in an an angry facebook post.

"What an irony this is that those who were tortured by the Panchayat regime in the past on the charges of being terrorist and anti-national are meting out the same injustice on oppressed Tharu agitators? But before writing the angry post on facebook, Dr Bhattarai confronted the police personnel accompanying Chaudhary to the hospital, spoke to a higher ranking police officer against the iron chain around Chaudhary’s leg and took a photo with his mobile phone despite police objection, according to Resham’s brother Mithu."tweeted Dr. Baburam Bhattarai.

It was because of Bhattarai’s intervention that police removed the manacle from Chaudhary’s leg last night.

Director General of Prison Department Hari Prasad Mainali said his office had not received any directive on this yet and his office was yet to investigate the matter. “But clamping iron chain around an inmate’s body during treatment is wrong,” he said.

Reports from Deshsanchar and The Himalayan Times

Nepali Embassy In London To Open All Days By NEW SPOTLIGHT ONLINE 1 hour, 21 minutes ago