World Cup Cricket 2019: Australia Beat England By 64 Runs To Book Their Spot In The Semi-finals

World Cup Cricket 2019: Australia Beat England By 64 Runs To Book Their Spot In The Semi-finals 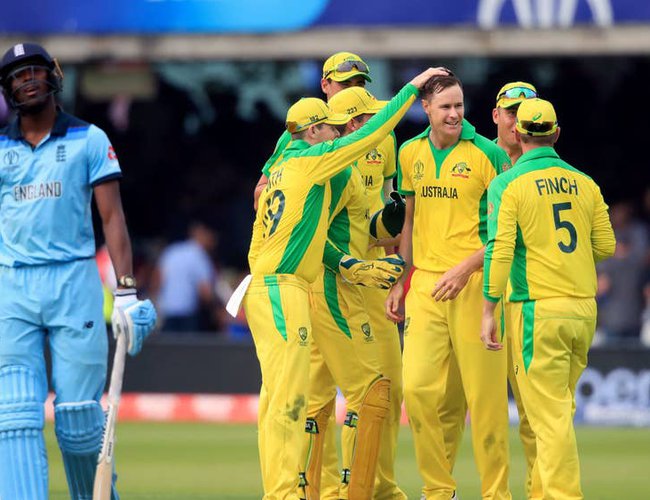 After being put into to bat, Australia posted a fighting total of 285/7. Australian captain Aaron Finch led the charge with the bat with a fine hundred and was well supported by David Warner, who scored a half-century.

For England, Chris Woakes was the pick of the bowlers with figures of 2/46. Chasing a tricky total of 286, England suffered a top-order collapse as they slumped to 26 for three inside the first 10 overs. Ben Stokes tried to get his team over the line, but his innings was cut-short by a brilliant yorker from Mitchell Starc.

ason Behrendorff picked up five wickets to confirm Australia's place in the semi-finals of World Cup 2019. England now have to win all of their remaining matches to reach the last four of the ongoing World Cup.

Australia captain Aaron Finch hit a hundred before left-arm quicks Jason Behrendorff and Mitchell Starc shared nine wickets as the reigning champions thumped England by 64 runs at Lord's on Tuesday to book their place in the semi-finals of the World Cup 2019. Finch made exactly 100 in a total of 285/7 before England slumped to 221 all out with 32 balls left. The recalled Behrendorff took 5/44 -- his first five-wicket haul in a one-day international -- while Starc became the leading bowler at the tournament with 19 scalps thanks to a haul of 4/43.

For England, who entered the showpiece event as the top-ranked side in ODI cricket, this was a second straight defeat after their shock 20-run loss to Sri Lanka.

The host nation, bidding to win a first World Cup title, can still qualify for the semi-finals but they are likely to need to beat at least one of India and New Zealand in their remaining two group games.

"There are teams that you have confidence playing against but I have had plenty of low scores against England as well," said man-of-the-match Finch.

"It was nipping around first thing. We were as tight as we could be and then took advantage of any width."

England's reply saw them lose a wicket off just the second ball of their chase, with the struggling James Vince -- only playing because Jason Roy was out with a hamstring injury -- bowled by a Behrendorff inswinger.

Test skipper Joe Root was plumb lbw to an inswinger for eight before England captain Eoin Morgan (four) fell into a hooking trap when a top-edge was held safely by Pat Cummins at fine leg.

Australia, who had lost 10 of their previous 11 ODIS against England, were in complete charge with the hosts now 26/3.

England have surged to the top of the ODI rankings on the back of aggressive run-scoring but the worry for Morgan's men is that too many of their top-order appear to know only one way to bat.

Jonny Bairstow, for example, fell next to a careless hook off Behrendorff before Stokes and Jos Buttler (25) repaired some of the damage with a fifth-wicket stand of 71.

Buttler was well caught by Usman Khawaja, running round and staying just inside the deep square leg boundary off Marcus Stoinis.

Stokes defiantly hit Glenn Maxwell for two sixes in three balls but, shortly before completing his fifty, the all-rounder pulled up with a calf injury.

Starc was brought back to take a key wicket and duly obliged with a thunderbolt yorker, his 18th wicket of the tournament, that ended Stokes's 115-ball innings of 89, including eight fours and two sixes.

Stokes's dismissal left England 177/6 in the 37th over and effectively ended the contest. Starc ended the match when he dismissed Adil Rashid.

Earlier Finch, dropped on 15, and fellow opener David Warner (53) came through some testing early overs to share a stand of 123 as too many of England's pacemen, with the exception of Chris Woakes, dropped short.

The skipper's exit sparked a late flurry of wickets but Australia had enough runs on the board.

Both Warner, the World Cup's leading run-scorer, and Steve Smith were booed as they entered and exited the field following their recent return from year-long bans for ball-tampering.

Finch went to his century thanks to a misfield by Woakes but next ball he miscued a hook off Jofra Archer and Woakes held the catch at fine leg.

The skipper faced 116 balls, with 11 fours and two sixes in his second century of this World Cup following his 153 against Sri Lanka.

Mitchell Starc produces one of the best yorkers of this World Cup to dismiss Ben Stokes for 89. It was quick and right on the money and Stokes could not have played it any better.