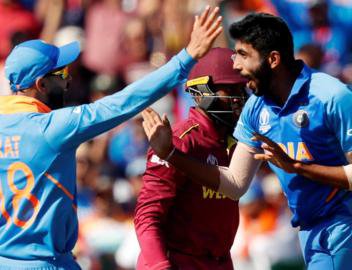 India moved a step closer to the World Cup semi-finals and ended West Indies' slim hopes of qualifying with a 125-run thrashing at Old Trafford.

It was an underwhelming response from West Indies after they were economical with the ball and tidy in the field.

Virat Kohli made 72 as India worked hard in front of a vociferous crowd, and MS Dhoni's unbeaten 56, which saw him take 16 runs from the final over, propelled them to 268-7.

West Indies were ultimately dismissed for 143 with 94 balls remaining and will be left to rue a impatient batting performance on a slow pitch.

India are the only unbeaten team in the tournament and yesterday replaced England - their next opponents - at the top of the one-day rankings.

They will head to Edgbaston on Sunday with plenty of confidence, knowing that victory will secure their semi-final berth and make England's task to qualify even more difficult.

England might have played close attention to this match; they may need to beat both India on Sunday and then New Zealand to reach the semi-finals.

What will they have learnt? India's top order is as dynamic as ever but the middle is brittle. Kohli top-scored and made batting look easy, but those around him faltered. India have a long tail which England may be able to exploit.

KL Rahul was bowled by Jason Holder, caught in two minds; Vijay Shankar, who has struggled for runs at four, was undone by a delivery that moved off the seam and the dangerous Hardik Pandya sliced to cover after a flurry of shots.

While Kohli can manipulate the field and find singles, he has yet to make a century at this World Cup, something that will not be lost on him. He was in disbelief as he pulled Holder straight to the fielder at mid-wicket as India looked to accelerate.

While MS Dhoni provided an entertaining finish for the packed Old Trafford crowd - he hit two sixes and a four off the final over of the innings - he likes to take his time, and the singles lessened as his innings progressed. While he propelled India to a score that was ultimately more than enough, he can also limit them in the crucial moments.

The biggest concern for England will be the bowling. Mohammed Shami is accurate up top, while Jasprit Bumrah's unorthodox action and mix of paces is difficult to get away. An impatient Chris Gayle holed out early on, before Shai Hope was bowled attempting an expansive drive.

India's spinners were excellent, although they were helped by some poor shots from West Indies' batsmen. Wrist-spinner Kuldeep Yadav found turn and had Nicholas Pooran, trying to play aggressively, caught at long-off, while Yuzvendra Chahal also struck with Holder trying to thrash him over cover.

West Indies needed to play with patience against their bowlers; they needed to be smarter about their shot selection against the spin. It would do England well to take notice.

West Indies were disciplined with the ball. Holder had miserly figures of 2-33, including two maidens and the wicket of Kohli; Roach was equally effective with 3-36.

However, in the death overs, they were expensive. Shai Hope fluffed a stumping that would have dismissed Dhoni and Holder, having bowled himself out, ended up turning to Carlos Brathwaite to bowl three crucial overs. They disappeared for 33 runs.

Then with the bat, needing to go at just under six an over, West Indies crumbled.

Of the top five only Sunil Ambris, trapped on the crease by a Pandya off-cutter, could have claimed to have received a good delivery. The rest were caught needlessly trying to play big shots.

"They are not patient enough, whenever a bowler is on top of them they hit out and get out. That's not how cricket is played, you've got to respect the bowlers."

West Indies crushed Pakistan in their opening game of the World Cup. Since then, their fortunes have been reversed. Pakistan could yet qualify for the semi-finals; the Windies are out of contention.