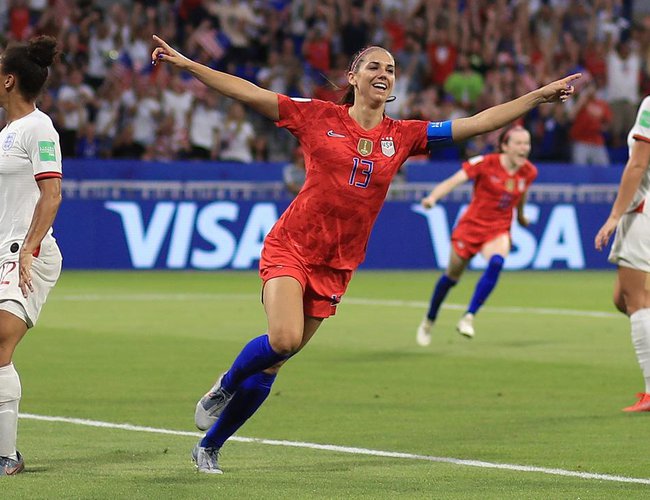 England's dreams of reaching their first Women's World Cup final were dashed as Steph Houghton's late penalty was saved in a dramatic semi-final loss to holders the United States.

The England skipper's 84th-minute spot-kick was held by Alyssa Naeher, shortly before Houghton's fellow centre-back Millie Bright was sent off for a second bookable offence, as the Lionesses exited at the last-four stage for a third major tournament in a row.

Winger Christen Press and striker Alex Morgan scored with headers either side of Ellen White's instinctive equaliser as the USA took a deserved 2-1 lead in a frenetic first half.

A spirited Lionesses side improved after the break and White thought she had equalised with a low strike from Jill Scott's flicked through ball, only to be found to be marginally offside on a video assistant referee (VAR) review.

White was then clipped in the area and Phil Neville's side were awarded a penalty after another VAR review.

But Houghton could not convert from the spot and the wait for a senior England side to reach a first global final since 1966 goes on.

The USA, who were backed by the majority of the 53,512 crowd in a gripped Stade de Lyon, are through to their third consecutive World Cup final and will now bid for a record fourth title when they face either Sweden or European champions the Netherlands on Sunday.

Those two sides meet on Wednesday, with the losers taking on the Lionesses in Nice in Saturday's third-place play-off.

The Lionesses were the first senior England side to reach the semi-finals of three consecutive major tournaments, after their third-place finish at the 2015 World Cup in Canada and their run to the last four at Euro 2017.

After winning the invitational She Believes Cup in the USA earlier this year, victories over Scotland, Argentina and Japan saw them top Group D in France, as belief grew that they could win their first major trophy.

Consecutive 3-0 victories over Cameroon and Norway in the knockout stages followed, but Neville's side were unable to play with the same composure on the ball against the confident defending champions.

England came under intense pressure in the early stages and may have been slightly relieved to be only 2-1 down at half-time, after the lively Rose Lavelle twice went close for the holders.

England had the better of the second 45 minutes and were rewarded with a late chance to level when Becky Sauerbrunn made contact with White's shooting leg when the Manchester City striker was poised to tuck home.

However, Houghton's penalty was weak and Naeher saved low to her right - the third spot-kick out of four England have missed in this tournament.

Two minutes later Bright was dismissed for a second yellow card for a clumsy foul on Morgan.

Some of the devastated England players sank to the ground in despair as the final whistle extended their wait for a first major title.

USA reach yet another final

Pre-tournament favourites the USA, who have reached at least the semi-finals of every Women's World Cup, will now contest their fifth final.

After narrow 2-1 wins over Spain and hosts France in their past two games, they showed their experience and clever game-management to see out a third consecutive win by the same scoreline.

They were rampant early on, and led through Press' powerful header, continuing their record of scoring inside the first 12 minutes in all of their games so far in this tournament.

They had almost netted even earlier, when Lavelle nutmegged Bright in the fourth minute and rounded Demi Stokes, only to see her close-range shot well saved by Carly Telford, who played in goal for England with number one Karen Bardsley out with a knock. 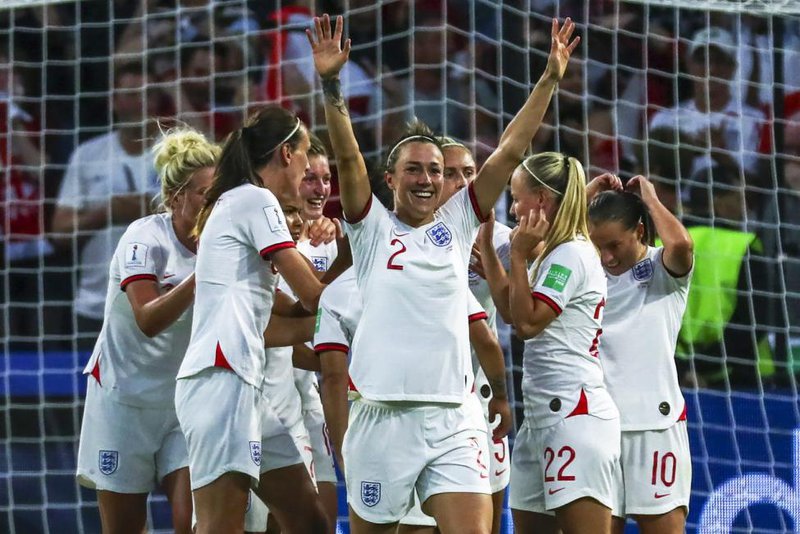 Morgan's sixth goal of this tournament put her level with White again at the top of the standings in the battle for the Golden Boot, after White had turned home Beth Mead's excellent ball from the left to level for England.

Hampshire-born coach Jill Ellis' side went through without their star of the previous two matches, winger Megan Rapinoe, who was a surprise late absentee with a hamstring injury.

Throughout this tournament, England head coach Neville - who took charge of the Lionesses in January 2018 - has insisted his side's style is "non-negotiable", but he raised eyebrows by tweaking his line-up tactically for Tuesday's semi-final.

Rather than playing wide on the right, Lyon winger Nikita Parris was moved to a more central role, playing as a deep striker in something closer to a 4-4-2 formation than the tried-and-trusted 4-2-3-1 that had seen the Lionesses through to the last four.

Toni Duggan and Fran Kirby were left out with versatile winger Rachel Daly and Arsenal's Beth Mead coming in to the side to start as wide midfield players. England had a 4-2-4 feel when they were attacking, but Neville's team were frequently overrun in midfield in the first half.

The introduction of Kirby at number 10 after the break and Parris' switch back out to the wings appeared to propel England back in to the game, as they rallied and saw more of the ball in the USA's half.

Ultimately, they remain without a win over the USA in the World Cup, having lost 3-0 in 2007's quarter-finals and being beaten in 10 of their 16 contests overall.

But the Lionesses have won over millions of new supporters at home, with record television audiences watching their run to the latter stages.

And their next major tournament will be on home soil, with 2021's European Championship to be played in England.

Tokyo Olympics: US, China And Japan On Lead, Nepalese Athletes Lost In Preliminary By Agencies 6 hours, 52 minutes ago

Olympics 2020 Begins With Gold For China And More Covid-19 Cases By Agencies 1 day, 5 hours ago

Tokyo Olympics Opening Ceremony To Be Held On Friday By Agencies 3 days, 14 hours ago

Suga To Meet Dignitaries Arriving For Games By Agencies 4 days, 14 hours ago