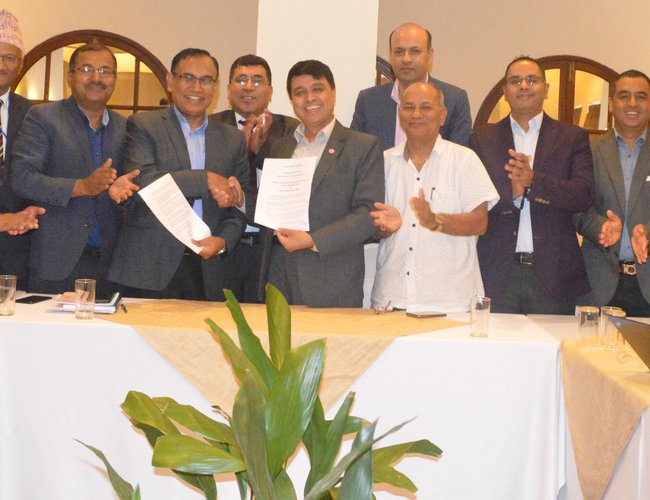 Even before the announcement of Monetary Policy by Nepal Rashtra Bank to push the commercial banks into merger and acquisition, Global IME Bank Ltd and Janta Bank Nepal have found their partner.

In line with the recent advise of Governor Chiranjibi Nepal who had advised banks to find the partners to fall in love prior to the Monetary Policy announcement, two commercial banks vis-a-vis Global IME Bank (GBIME) and Janata Bank Nepal (JBNL) have decided to merge.

According to the preliminary report, the swap ratio has been set at 1:0.85. This means that investors holding 100 unit shares of JBNL will receive 85 units of GBIME post the merger. However, the final swap ratio will be determined after the Due Diligence Audit (DDA).

During a recent meeting with the chairpersons and chief executive officers of various banks, Governor Nepal had directed the bankers to look for ‘merger partners’ ahead of the Monetary Policy speech.

“We have decided to enter into a merger looking into NRB’s plans, which will be announced through the Monetary Policy speech,” said Chandra Prasad Dhakal, chairman of Global IME Bank.

The MoU was signed by Dhakal on behalf of Global IME Bank and Janata Bank Chairman Keshav Rayamajhi. Both sides have agreed to name CEO of Janata Bank Parshuram Kunwar as the chief executive of merged entity and Global IME’s Acting CEO Mahesh Dhakal as his deputy. The new bank will retain the name ‘Global IME’.

As per Dhakal, the management teams of both the banks will finalise all the necessary procedures within four months.

NIBL Heritage Conservation Pioneer By A Correspondent 3 weeks, 1 day ago

ADB New President By A Correspondent 3 weeks, 1 day ago