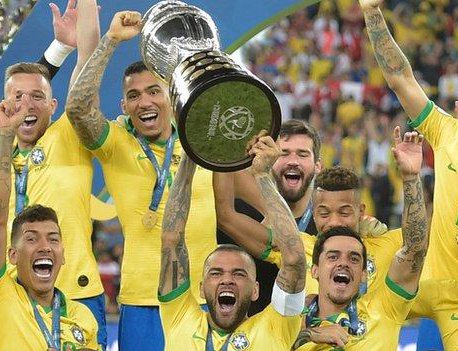 Gabriel Jesus scored one goal and assisted another before being sent off as Brazil won a first Copa America title in 12 years, beating Peru 3-1.

Manchester City forward Jesus set up Everton to volley in the opener before scoring the decisive second.

Paolo Guerrero had briefly given Peru hope when he equalised from the penalty spot minutes before Jesus struck.

Jesus was shown a second yellow with 20 minutes left but Richarlison's late penalty sealed the win.

Victory will have been a huge relief for Jesus, who was in tears when he was sent off, kicking a water bottle and then pushing over the VAR monitor as he left the pitch.

It is the ninth time Brazil have won the Copa America and is their first tournament success since winning a gold medal at the 2016 Olympics.

The victory also maintained their record of winning the Copa America every time they have hosted it.

Jesus threatened to turn from hero to villain when he was sent off in the 70th minute. There will have been few Brazilians celebrating as wildly at the final whistle as Jesus, who went through the rollercoaster of emotions during the match.

The striker has, at times, struggled to deliver on the international stage - he failed to score a goal in five games at the 2018 World Cup - but was the standout performer in the first half of Sunday's final.

His cross for Brazil's first was excellent, holding the ball up on the right before spotting an unmarked Everton at the back post, then picking out the striker with a pinpoint delivery.

Peru, who had upset the defending champions Chile in the semi-finals, were back on level terms just before the break when their all-time top scorer Guerrero converted a penalty, awarded by VAR for a handball by Thiago Silva.

But Jesus took centre stage once again, tucking a neat finish in at the near post deep into first-half stoppage time.

Jesus was furious when he was sent off, with a water bottle joining the VAR monitor in being the focus of his frustration

Brazil looked in control from then on, but the game took another twist midway through the second half when Jesus jumped into the back of Carlos Zambrano. Referee Roberto Tobar had no hesitation in producing the second yellow. 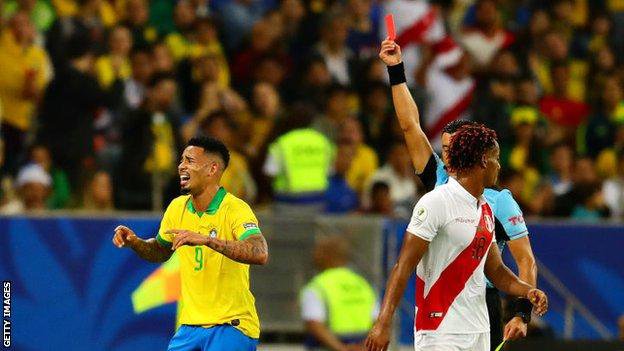 The 22-year-old was in tears as he left the field and sat on the steps inside the tunnel, fearful that his dismissal would aid a Peru comeback.

But he was able to celebrate when Brazil were awarded a penalty four minutes from the end after Everton was fouled by Zambrano. Substitute Richarlison kept his cool to convert from the spot and end Brazil's Copa America trophy drought.

Rs. 60 Billion Has Allocated As Relief Package: Finance Minister Dr. Khatiwada
May 30, 2020
TIA Prepares Guidelines For Domestic Flights
May 30, 2020
George Floyd killing: Protests Spread Across The US
May 30, 2020
Trump Says U.S. "Terminating" Relationship With WHO
May 30, 2020
More Than Half A Million Nepali Foreign Migrant Workers Registered For Repatriation
May 30, 2020

Trump Says U.S. "Terminating" Relationship With WHO By NEW SPOTLIGHT ONLINE May 30, 2020

More Than Half A Million Nepali Foreign Migrant Workers Registered For Repatriation By NEW SPOTLIGHT ONLINE May 30, 2020

Prime Minister Narendra Modi Completes One Year Of His Second Tenure By NEW SPOTLIGHT ONLINE May 30, 2020